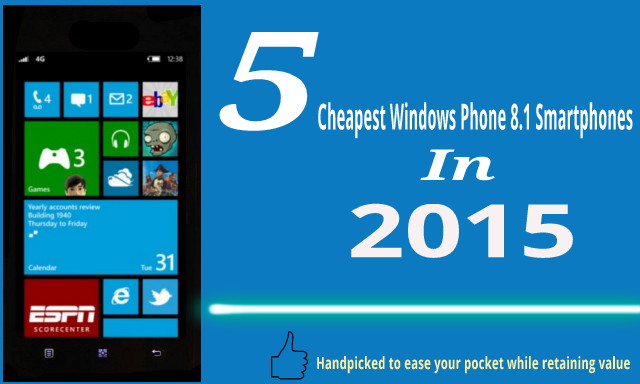 If you are looking forward to buying Windows Phone powered smartphone or wish to have one without spending much, you can consider the phones listed below. As of now, they are the cheapest Windows phone you will find in the market below $100 USD.

Despite the low price, be rest assure that you won’t have difficulty running most popular apps such as Whatsapp, Facebook, and BBM on these device because the least processor that powered them ranges from dual-core to quad-core, which can handle almost any task.

The first and the cheapest in the list. The Win 400 was launched in November last year in India at a ridiculous price of Rs 4,999 ($80 USD) with 1.3GHz quad-core Qualcomm Snapdragon 200 processor and 512MB of RAM to back it up. The smartphone supports dual-SIM and features 4-inch WVGA (480*800 pixels) IPS display, 4GB storage, 5-megapixel rear camera, 1.3-megapixel front camera, and 1500mAh battery.

The recently launched Lumia 435 closely follow Celkon Win 400 when it comes to price. The smartphone was launched alongside with Lumia 532 that is in the fourth position on the list. With just $80 USD you can get yourself one. Its specifications are quite impressive though not up to Win 400 standard.

It was launched in September last year and comes with a price tag of $100 USD. The Titanium Wind W4 is the first Windows Phone 8.1 running smartphone launched by Karbonn and it features almost identical specifications when compared to Celkon Win 400.

For just only $100 USD you can get your hands on this sleek smartphone. The Canvas Win 092 was launched in June last year alongside with its brother, the Canvas Win W121, and it is one of the first Windows Phone 8.1 smartphone to debut in India.

It features a 4-inch WVGA IPS display and packs a 1.2GHz quad-core Qualcomm Snapdragon 200 processor slammed with 1GB of RAM. The Canvas Win W092 sports an 8-megapixel rear camera with LED flash, and a 2-megapixel front camera. Other specifications include dual-SIM, 8GB storage, and 1500mAh battery.