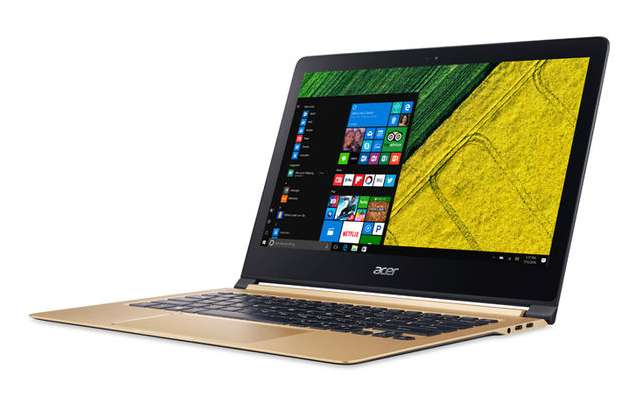 Smartphones and tablets are not the only device unveiled by Acer today in Berlin, the company also announced new range of laptops under its “Swift” line-up namely, Swift 1, Swift 3, Swift 5, and Swift 7. The notable and most powerful among the four is Swift 7, which is wrapped in a very thin aluminium body that measure just 9.98mm at its thinnest point with the overall weight pegged to 1.1kg.

Opening the aluminium-made lid of the ultra-thin reveals a 13.3-inch IPS display with a brilliant full-HD resolution, protected by Corning Gorilla Glass 4. Surprisingly, the Swift 7 comes with a 7th-Generation Intel Core i5 Kaby Lake, the junior of 7th-Gen Core i7 based on Kaby Lake that was publicly announced by Intel yesterday. The processor is accompanied by an 8GB of RAM, and there is a 256GB SSD onboard as well.

The Acer Swift 1, 3, 5 and 7 runs Windows 10. The First measure 17.9mm at its thinnest point and weighs 1.6kg. It comes with a 14-inch HD display and users are given the option to choose between Pentium and Celeron processor, and 32GB, 64GB and 128GB of SSD storage, accompanied by 4GB of RAM. The Swift 5 and Swift 3 have metal chassis and are powered by 7th-Generation of Intel Core processors. These however, includes fingerprint scanners with support of Windows Hello features. The Swift 3 is 17.95mm thick and weigh 1.5kg, and the Swift 5 14.58mm thick and 1.36kg heavy.

The Acer Swift 5, 3 and 7 will be available in North America from October and the Swift 1 in November this year.