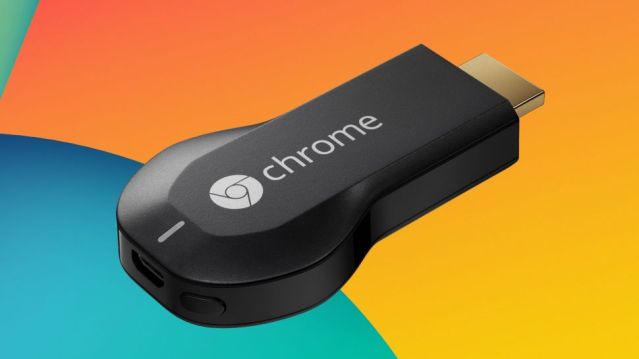 After two years of the original Chromecast, Google has announced an updated device that looks a bit different, but works on the same premise.
Chromecast plugs into any TV with HDMI and USB ports (or requires separate power if not) and can be controlled from a phone, tablet, or computer. From there, you can “cast” content displayed on your device’s screen to your TV.

Many popular apps already have a Google Cast button built directly into their apps, thanks to the popularity of the first device. Google’s own apps, for instance, such as YouTube, offer Cast support, enabling you to send YouTube clips to your TV with a simple tap of a button.
But the new Chromecast also offers much more, so here’s everything you need to know about the new Google Chromecast (2015).

The new Chromecast is available now from the Google Store in 17 countries, including the US and UK. It comes in three different colours and costs the same as the original version. It’s $35 in the US, £30 in the UK.

The new Chromecast: Design and hardware

The new Chromecast is a round device with a HDMI cable hanging out of one end. It also comes in three different colours: black, lemonade and coral (yeah, that’s yellow and red for the rest of us). It is 51.9 x 51.9 x 13.9mm, while an included power cable is 1.75m in length.

The second-generation Chromecast comes with a number of new features, including improved Wi-Fi (802.11ac – dual-band), support for content feeds, and something called “Fast Play”, which should simplify the process of connecting Chromecast to other devices by preloading content.

As well as announce a dedicated Chromecast Audio device, Google revealed that Spotify is finally coming to the new Chromecast too. And owners of the older Chromecast will also be able to use Spotify on their devices from today.

Google is also updating the Chromecast companion app, turning it into a place to go for when you want to find things to watch. Prviously, the app just let you set up and manage the dongle.
The updated companion app though includes new features. The headline one is the ability for the app to see what else you have installed on your device that is Chromecast enabled so you can jump straight to content within.

Like all other streaming devices of late, there is heightened focus on gaming for the new Chromecast. During the unveiling event, Google showed how a game of Angry Birds Go – the karting game – can be played on a big screen through the Chromecast using an Android handset. Other games are expected to follow too.

Google has also announced an entirely separate Chromecast that’s designed to stream music and other audio. It’s called Chromecast Audio and is different from the other new Chromecast detailed above.
This other dongle is able to hook up to Wi-Fi-enabled speakers through a standard 3.5mm headphone cable. You can also hook up multiple dongles to speakers throughout your home to have them all stream music in sync.

So, with Spotify on-board as one of Google’s partners (explained above), Chromecast Audio is shaping up to be a compelling offering for those looking to stream “high-quality sound” to any or all the speakers in their home.