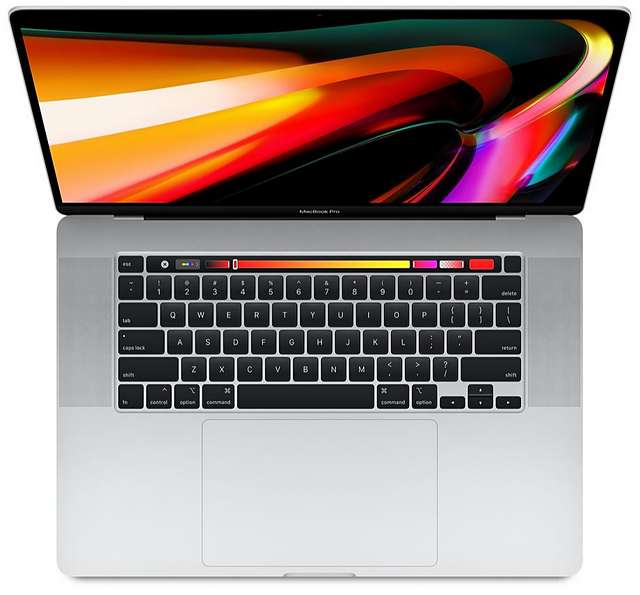 Apple today unveiled an all-new 16-inch MacBook Pro — the world’s best pro notebook — designed for developers, photographers, filmmakers, scientists, music producers and anyone who relies on a Mac to create their life’s best work. The all-new MacBook Pro features a brilliant 16-inch Retina Display, the latest 8-core processors, up to 64GB of memory, next-generation graphics with up to 8GB of VRAM and a new advanced thermal design, making it the most powerful MacBook Pro ever.

Our pro customers tell us they want their next MacBook Pro to have a larger display, blazing-fast performance, the biggest battery possible, the best notebook keyboard ever, awesome speakers and massive amounts of storage, and the 16-inch MacBook Pro delivers all of that and more,

Pros love the brilliant 500 nit, P3 wide color gamut Retina display on MacBook Pro, and at 16 inches, it’s the largest Retina notebook display ever. Featuring a resolution of 3072×1920 and a higher pixel density of 226 ppi, the 16-inch Retina display delivers nearly 6 million pixels and an even more immersive front-of-screen experience. Each display is individually calibrated in the factory for accurate gamma, white point and primary colors.

The 16-inch MacBook Pro features a new Magic Keyboard with a refined scissor mechanism that delivers 1mm of key travel and a stable key feel, as well as an Apple-designed rubber dome that stores more potential energy for a responsive key press. Incorporating extensive research and user studies focused on human factors and key design, the 16-inch MacBook Pro delivers a keyboard with a comfortable, satisfying and quiet typing experience. The new Magic Keyboard also features a physical Escape key and an inverted-“T” arrangement for the arrow keys, along with Touch Bar and Touch ID, for a keyboard that delivers the best typing experience ever on a Mac notebook.

The 16-inch MacBook Pro uses the most advanced thermal architecture ever in a Mac notebook to enable the system to run at higher power for sustained periods of time. The sophisticated fan design features a larger impeller with extended blades along with bigger vents, resulting in a 28 percent increase in airflow, while the heat sink is 35 percent larger, enabling significantly more heat dissipation than before. Together, these advancements in cooling capacity allow the 16-inch MacBook Pro to sustain up to 12 more watts during intensive workloads than the previous design.

Whether compiling code, editing multi-cam video or doing 3D animation, MacBook Pro customers need pro-level compute power they can take on the go. To deliver blazing fast performance, the 16-inch MacBook Pro features the latest 6- and 8-core 9th-generation processors with Turbo Boost speeds up to 5.0 GHz, which deliver up to 2.1 times faster performance than the quad-core 15-inch MacBook Pro.1 Its powerful CPUs, combined with faster memory up to 64GB for the first time, and its more advanced thermal design, will enable pro workflows never before possible on a MacBook Pro.

When compared to the fastest quad-core 15-inch MacBook Pro:

Graphics performance is critical to pros, whether they’re creating the next big game title, rendering a complex 3D scene or color grading a blockbuster film. The 16-inch MacBook Pro features new AMD Radeon Pro 5000M series graphics — the first 7nm mobile discrete GPUs for pro users. Paired with GDDR6 video memory and with an 8GB VRAM option for the first time, pro users will be able to tackle GPU-intensive tasks faster than ever. Customers who choose the standard configuration will see 2.1 times faster graphics performance than the previous standard configuration. Those who opt for the highest-end graphics options will see up to 80 percent faster performance than the previous high-end configuration.

When compared to the previous-generation 8-core 15-inch MacBook Pro with the highest graphics options:

To power all this performance, MacBook Pro features a 100Wh battery — the largest ever in a Mac notebook — for an additional hour of battery life of up to 11 hours of wireless web browsing or Apple TV app video playback.

For pros with massive asset libraries and large projects that need even more storage in a notebook, the new MacBook Pro doubles the SSD storage to 512GB and 1TB on standard configurations. And for the first time, MacBook Pro can be configured with a staggering 8TB of storage — the largest SSD ever in a notebook.

The 16-inch MacBook Pro introduces a completely redesigned six-speaker, high-fidelity sound system designed to bring musicians, podcasters and video editors the most advanced audio experience ever in a notebook. New Apple-patented force-canceling woofers use dual opposed speaker drivers to reduce unwanted vibrations that distort sound. As a result, music sounds more clear and natural than ever before, and the bass can go half an octave deeper. An upgraded high-performance mic array delivers a 40 percent reduction in hiss and an improved signal-to-noise ratio that rivals that of popular professional-grade digital microphones, delivering super-clean recordings that capture even the quietest details.

Pro users love the power, reliability and productivity built into macOS — designed to take full advantage of Mac hardware, deliver robust features with the highest possible performance and work seamlessly with other Apple devices. Dark Mode highlights pro content while controls recede into the background on the Mac’s stunning Retina display. Sidecar, a new feature in macOS Catalina, lets users leverage iPad as a second display or as a high-precision tablet input device using Apple Pencil. Files on macOS can be quickly browsed with visuals and easy access to metadata with Gallery View in Finder. Along with a robust ecosystem of third-party apps and devices, macOS includes Apple apps like Safari, Mail, Pages, Numbers and Keynote, and supports high-performance apps like Final Cut Pro X, Logic Pro X and Xcode.

Starting at $2,399, the 16-inch MacBook Pro is available today through apple.com and the Apple Store app. It will be in Apple Stores and Apple Authorized Resellers in the US later this week and coming soon to stores around the world. Additional technical specifications, configure-to-order options and accessories are available online at apple.com/mac.