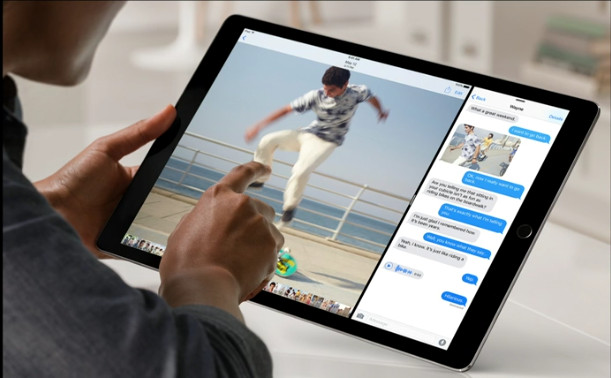 As expected today, Apple launch event of its new device has kicked off, and what comes first is the iPad Pro, the latest flagship tablet in the iPad series. It comes in three variants, 32GB version, 128GB version (Wifi-only), and 128GB version with Wifi and LTE. The first is priced at US$799, the second at US$949, while the third version costs US$1,079. It will be available globally starting from November.

The main highlights and most notable features that worth mentioning is its huge 12.9-inch Retina display, packed in a slim 6.9mm premium body with a body weight of 712 gram. Also, the new iPad Pro comes with a more powerful 64-bit chip, A9X, which Apple claims is twice faster in storage performance and bandwidth, and 1.8x in overall performance than its previous , the A8 chip. Two new accessories were also introduced alongside with the tablet, Smart Keyboard and Apple Pencil, which can be purchased separately at US$169 and US$99, respectively.

The Apple iPad Pro is painted in Space Grey, Silver, and Gold colors.