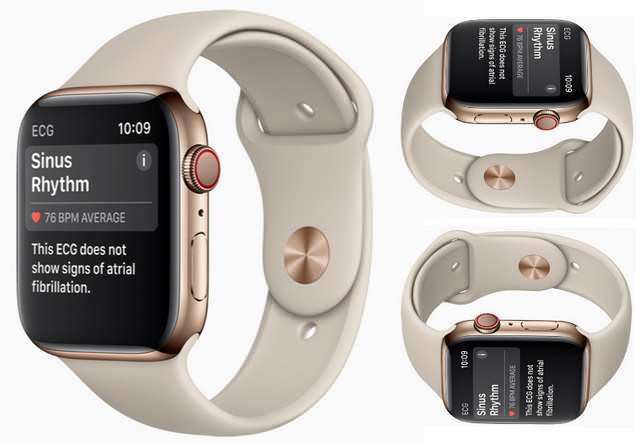 Along with the new 2018 iPhones comes the Watch Series 4, Apple latest smartwatch with upgraded features and functionality, the successor of the Watch Series 3. The unveiling was done at the “Gather Around” event on Wednesday where the curtains were officially drawn off.

The new Apple watch follows the tradition of its predecessors; the design is quite familiar, but then this featured a larger display and a new edge-to-edge curved screen. When we say larger, the Watch 4 display is 30% larger compared to that of the Watch 3. This changes in size brings about a redesigned UI to take advantage of the new screen estate. The straps are now offered in 40mm and 44mm as opposed to 32mm and 36mm on previous models.

The round dial button which in the Apple world is called “Crown” is still present for navigating around, but it has been re-engineered to include haptic feedback. With this change, an user will know when the clicks really clicked or not by feeling a subtle vibration on the wrist. The back of the watch also get redesigned with black ceramic and sapphire crystal. Apple claimed this enhances the cell reception by letting radio waves pass through.

The large screen estate now let users add contact to the watchface and access it with one tap of a click. Moreover, more details are now shown on the watchface in standby. These includes current activities such as heart rate, stocks and other data.

The Breath app is now directly available as a watchface and can be accessed instantly by raising the arm without fumbling around. With the Apple Watch Series 4 comes three new dynamic watchfaces; fire, water, and vapor, which when applied interact with the display in an intuitive way.

Moving on, the speakers are 50% louder for better sound quality when making calls or using Siri, and the Mic has been shuffled to the other side to reduce echo during voice call. The Watch Series 4 has a new Fall detection system that make use of the watch accelerometer and gyroscope sensors to identify when hard falls occur, using a custom algorithm. The system can recognize up to 32 g-forces and sfter a fall will send an alert to a custom number.

New health benefits are tied to the device, the most prominent of these is the new ECG that monitor electrocardiogram activities with supports for advance heart rate tracking features. The smartwatch can also classify if the heart is beating in a normal pattern or when there are irregularities, such as whether there are signs of Atrial Fibrillation (AFib), a major heart condition.

The Watch Series 4 GPS edition starts at $399 and will be available for pre-order starting from September 14th in 26 countries, including the US, UK, Canada, and most European regions. The Watch Series 4 Cellular + GPS price starts at $499, but it will be available in 16 countries. Both models will go on sale from September 21st. Color options provided are Space Black, Gold, and Silver.