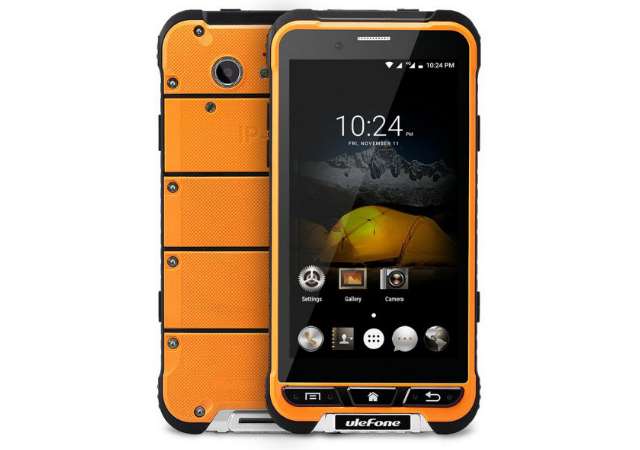 There are few manufacturers out there who are explicitly known to be front runner when it comes to making rugged phones, among which are Kyocera and Panasonic. Today, a Chinese firm known as Ulefone has joined the queue with the launch of its first rugged smartphone called Armor.

Ulefone is not the first Chinese OEM to launch a rugged smartphone (Vphone X3 comes to mind), but the fact that this fairly known Chinese company produce one indicates that we should be expecting more from other Chinese OEM soon. As could be expected from any device tagged “Rugged”, the Armor is waterproof and dustproof certified with IP68 rating, meaning, it can survive in more than 30 meters deep of water. It is also shock-proof—thanks to its polycarbonate-TPU double-layer body, which also acts as a shield that strengthens it to be able to withstand extreme high and low temperature ranging from -20ºC to 80ºC.

While physical navigation buttons are nearly extinct in smartphones released these days, the Ulefone Armor is gallantly flaunting hers. At the bottom below the display are Menu, Home, and Back keys. There are also volume keys at the left, a power button at the top right, and a dedicated SOS button at the bottom right side of the phone.

In terms of specification, the Ulefone Armor features a 4.7-inch IPS display with HD (1280×720) resolution, protected by Corning Gorilla Glass 3. It is powered by a 64-bit octa-core MediaTek MT6753 processor with a clock speed of 1.3GHz, slammed with 3GB of RAM and Mali-T720 GPU. The phone includes a 32GB of built-in storage that can be expanded up to 128GB via MicroSD card.

Running Android 6.0 Marshmallow out-of-the-box, the Ulefone Armor offers dual-SIM functionality with supports for 4G LTE. It is equipped at the rear with a 13-megapixel camera with LED flash, capable of recording 1080p video, while a 5-megapixel camera is placed at the front. Apart from 4G LTE, other connectivity options included are Bluetooth 4.1, WiFi, 3G, 2G, GPS, NFC, and Micro-USB. It is backed by a 3500mAh battery.

The Ulefone Armor is painted in Black and Orange colors. It is available at a price of $159.99 on the company store for those who pre-order now, and will cost $199.99 when it openly go on sale.