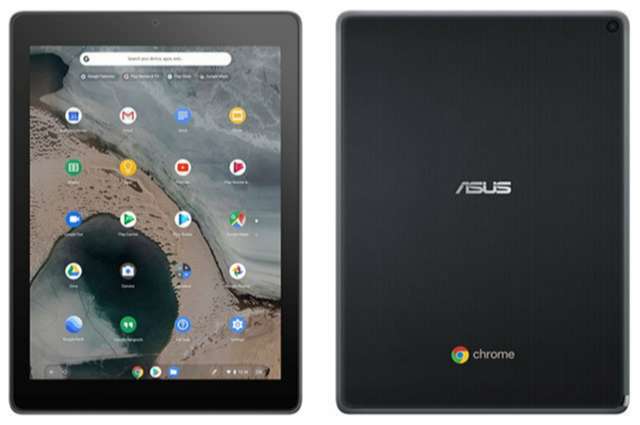 Asus at the CES 2019 unveiled new bunch of laptops and PCs, but the company also introduced its first Chrome-powered mid-end tablet at the event dubbed Chromebook Tablet CT100. Although Asus is yet to unwrapped its full technical specifications, it revealed some of the notable features of the device.

The Chromebook Tablet CT100 has a rubberized chassis that showed its toughness and proclaimed its ability to withstand accidental fall from a height of up to 100cm. The MIL-STD 810G military standard it earned further proven that it was made to survive daily bumps in tough areas, and to survive in unusual high or low temperature and pressure.

The tablet is not compact considering its 9.7-inch QXGA (2048×1536) screen, but Asus said it is one of the lightest, weighing just 568 grams. Its brilliant 9.7-inch touchscreen is supported by the Wacom EMR Pen, which is included in the package. The Pen works independently and does not need to be  paired or charged before it can be used. Built-in pen holder keep it safe when not in use.

Since it runs on Chrome operating system, users will be able to install and run Android applications seamlessly. Moreover, it comes pre-installed with Google Play Store. Technically, the Chromebook Tablet CT100 is powered an OP1 hexa-core chipset, clubbed with 4GB of RAM and 32GB of storage that is user expandable via a MicroSD card.

It has a 5MP rear-facing camera, and a 2MP front camera for selfie and video calling. Among the connectivity present on the device are USB Type-C port, WiFi, and a 3.5mm audio jack. Asus claimed that it can render up to 10 hours of battery life in a single charge.

The tablet is expected to shipped in the coming months, but there is no details on its pricing yet.