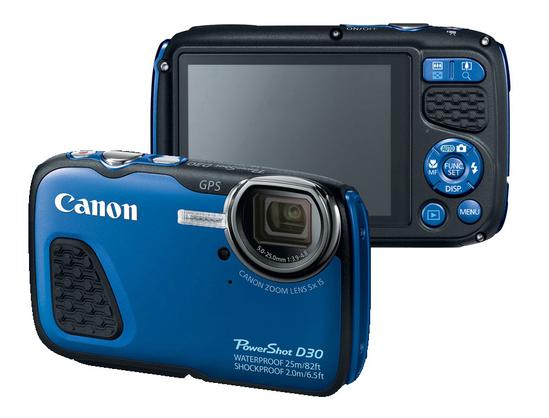 Canon’s PowerShot D30 is a waterproof and ruggedized compact camera designed to compete with the Nikon Coolpix AW120, Olympus Tough TG-3, Panasonic Lumix FT5 and Ricoh WG-4 GPS.
To keep pace with these cameras, Canon made the D30 considerably tougher than the previous D20. It now boasts a best-in-class 25-metre waterproof rating and will survive drops from two metres.

The camera’s sensor, processor and lens specs remain unchanged from its predecessor, but the new camera does have a slightly lower RRP.
The Powershot D30 will let you dive deeper than any of its rivals, with its 25-metre depth rating being leagues ahead of the competition. The camera’s two-metre shockproofing and -10ºc freezeproofing are more typical stats though, and unlike the Olympus TG-3, Panasonic FT5 and Ricoh WG-4, the D30 doesn’t have a crushproof rating.

At the heart of the camera is a 12.1-megapixel CMOS sensor with a maximum sensitivity of ISO3200. It’s an identical spec as the sensor in the outgoing D20 and you also get the same DIGIC 4 processor which is now a couple of generations old…continue reading from here