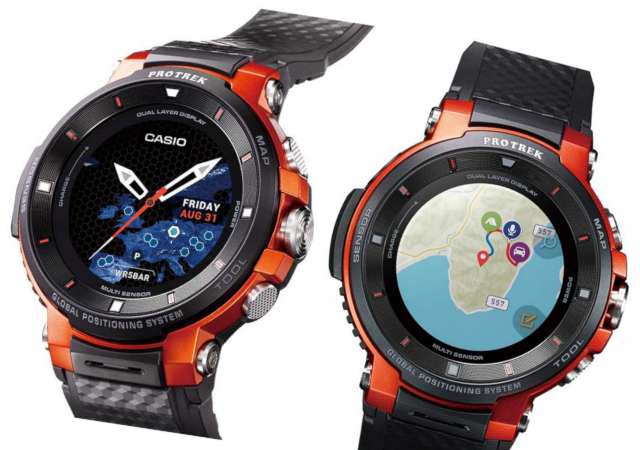 The PRO TREK WSD series have been one of the major highlight in key event since 2016, beginning with the CES 2016 where the first model dubbed F-10 was born. At CES 2017 we witnessed the launch of its successor the F-20, and now Casio has launched the third generation of the device at IFA in Berlin, the WSD F-30, running Wear OS.

This features a smaller 1.2-inch circular dual layer display when compared with its predecessors, but has a richer 390×390 pixel resolution. The dual layer display is composed of a monochrome LCD and a TFT LCD displays. The PRO TREK WSD series are known for their rugged durable features and the new F-30 doesn’t differs, it is military grade MIL-STD 810G certified as it can survived in extreme weather and other day-to-day bumps.

Moreover, it is dust resistant and can survived in up to 50 meters deep in water. One of the primary feature of the F-30 is its tracker. It has an inbuilt GPS for tracking wearers location in real-time, which can be viewed on a pre-loaded offline color map. There is an Extend Mode that lowers battery consumption by displaying time and measurement data on the monochrome display.

In Extend Mode, the operating system is switched to an energy-saving mode up to a time defined by the user, and the user can view his/her current location  on the color map with a tap on a button. Casio claimed up to three days of GPS tracking in Extend Mode.

Sensors included are accelerometer, gyrometer, magnetic compass, and pressure (air, altitude) sensor. The smartwatch can be paired with smartphones running Android 4.4+ or iOS 9.3+ via Bluetooth (4.1 LE) or WiFi.

The WSD F-30 will be available from January 2019 at select markets for $549 USD. It comes in Blue, Black and Orange colors.