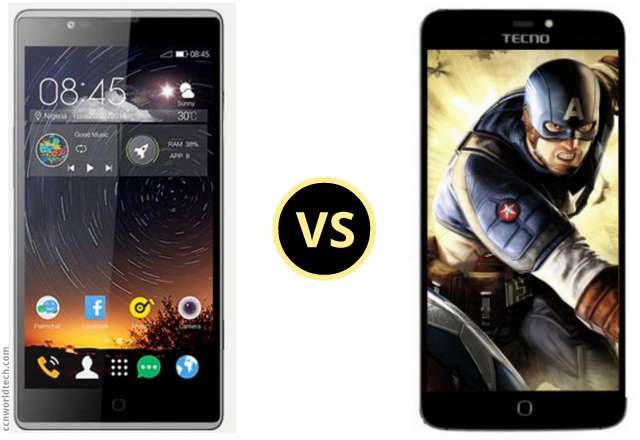 While we are waiting for Camon C8, Tecno first Android Lollipop powered smartphone to go on sale which may be anytime from now, we think it’ll be fun enough to go back in time and pick from one of the notable device the firm has released in the past.

We couldn’t find one notable enough as the Phantom Z which was the company’s first Android 4.4 KitKat smartphone. It was officially launched in July last year and it remains the best highly-specd Android phone ever released by Tecno.

Can you smell the fun? For those who can’t, we’ll be comparing Tecno first KitKat smartphone Phantom Z with its first Lollipop device Camon C8. Can Phantom Z still stand a chance against Camon C8 after a year? What does it has that is missing in Camon C8? Bet you can’t wait to find out. We’ll be highlighting their key specifications, pointing out their differences and similarities. Just keep reading.

Note: When it comes to big screen both can chest out. The 0.3-inch missing in Phantom Z to rival Camon C8 is well repaid with full-HD resolution it has, which Camon C8 flatly lacked. You’ll get crisper, sharper, vivid colours on Phantom Z than on Camon C8 in every angle.

Note: In this aspect, Camon C8 doesn’t stand a chance against Phantom Z when it comes to picture pixel and quality. Both are photocentric we won’t deny, but one has got it more than the other.

Camon C8 has a chance here. Android System will already taken roughly 4GB out of 32GB on Phantom Z leaving just 28GB, which you’ll have to stick with forever, but even if 4GB is taken from the 16GB on Camon C8 you can expand it further anytime as you wish.

Note: Both packed roughly the same capacity, but considering the octa-core chipset and 1080p display in Phantom Z which requires more power than quad-core chipset and 720p display in Camon C8, it may not last longer. Camon C8 kills Phantom Z in this aspect but didn’t dispose its body. It’s not that Phantom Z doesn’t have a good battery life, it does, but Camon C8 will have a better one.

So, it seem Phantom Z is still a good choice afterall, that is if you don’t mind the outdated Android 4.4 KitKat OS it runs. But if you do, then Camon C8 might be the right choice for you. And by the way, we expect Camon C8 to cost twice less than Phantom Z and that’s a big save.

Tecno Camon C8 is finally out and readily available. Turns out we are right, it costs twice lesser than the price of Phantom Z. By now, we know you’ll have already make your choice.