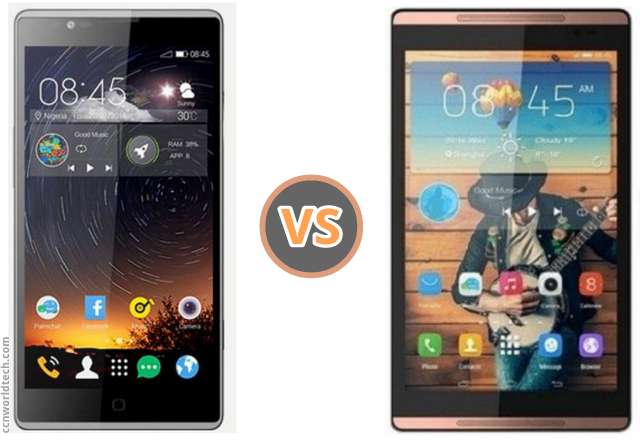 Tecno next flagship with Android 5.0 Lollipop is around the corner, we’re talking about the Camon C8 ofcourse, but what chance does it have against Tecno 8H (Droipad 8) that it’ll be un-sitting as the firm newest device. To remind you, Droipad 8 was launched two weeks before Droipad 7 was released, it also runs Android 5.0 Lollipop out-of-the-box.

Being a tablet doesn’t stopped it from having two SIM slots with voice-calling functionality and 3G. Does Camon C8 stand a chance? What’re their differences and similarities? Which one will serve well? We can’t wait to answer these questions as we dive into their core specifications, comparing both while highlighting their major field.

Note: There’s no much difference besides the screen size, however, pixel density in a compact, portable display are usually more concentrated than on larger display. Though we do not know the exact pixel density of Camon C8, but we expect something above 250ppi. Some may not notice the difference, so, it’s not a major threat. If you like big screen you might consider Droipad 8.

Note: Both are head to head in this aspect, what Camon C8 can run Droipad 8 will definitely runs it.

Note: Camon C8 really mean business in camera aspect, this phone is built not only to take pictures but to take quality pictures. Its front camera is also good. If we’re to put it in a simpler way, the pixel of picture Camon C8 front camera will take is what Droipad 8 rear camera will take. We do not know the type of sensor used in both camera so we cannot judge their quality.

Note: None is disappointing in this aspect.

Note: What Camon C8 can do Droipad 8 can also do. You want to use two SIM cards? Droipad 8 will gladly packs both. But, how comfortable will it be when receiving a phone call with a gigantic screen. Got the hint?

Note: Hmm, Droipad 8 has taken its revenge here against its lack of proper camera. Camon C8 has nothing to boast in this segment (though it can in photography). 5,100mAh is just too much to be compared with 3,000mAh, that’s almost twice the capacity.