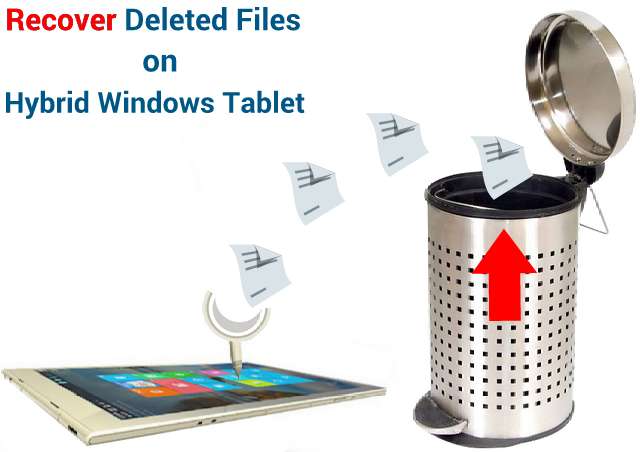 There is a chance of you losing files and data stored on your 2-in-1 hybrid Windows 10 tablet due to some unforeseen circumstances, we sure hope this article will be of help to you in recovering them.

The beauty of 2-in-1 is not only limited to its compact lightweight design, but they can also blend seamlessly and be use in any environment whether in office, home, or even while lying down. Most of 2-in-1 release these days also runs full desktop operating system i.e Windows 10 just like laptop and when we are talking about their horsepower and multitasking ability, they tend to be more higher than most laptops with Pentium and Celeron CPUs as well—thanks to latest Intel Core m and Atom processor series which are specifically optimized for use on such devices.

But hybrid tablets does have one major disadvantage which is limited space. For example, the highest storage capacity we have ever seen on Chuwi 2-in-1 tablets is 128GB, while the most common is 64GB with MicroSD slot included to expand the storage. Also, when talking about flagship device by Apple such as the MacBook Air series or Microsoft Surface Note series, the most common variants are the ones with minimal storage capacity i.e 128GB or 256GB, because they are far cheaper than their 512GB and 1TB counterparts.

Running a full Windows 10 OS on 2-in-1 hybrid tablet is cool, especially if the device has a powerful processor and Graphics to handle loads of tasks. Windows 10 also comes with a special treat for hybrid tablet to make things snapper which is “Tablet mode”. But like every other electronics, an issue is bound to raise at anytime. The most common for devices like this is virus attack, because they tend to be more use often with the internet. With various malwares and viruses roaming around the web, in emails, there is a slight chance for the system to not be infected at one point in time.

Depending on the type of virus or malware, the system files may get corrupted and the user will be forced out of Windows. In subtle cases, an user may lose all files and documents stored on the disk. Partitioning the disk into two separate drives could help prevent the damage caused to some extent, but unfortunately, with little storage capacity planted in most of the 2-in-1 tablets out there we really doubt any users will thought of partitioning their disk or SSD. Formatting the disk and installing a new Windows OS may be the next thing to do, but will you let all those important files get deleted just like that?

The good news is all files and data lost during virus attack on a system can be retrieved, even on 2-in-1, even after formatting. There is a software that can do the job, we’ve tested it and it works. EaseUS is a free data recovery software that enable PC owners to fetch and recover files that are lost due to virus attack, system crash, hard disk failure and more.

The software only needs to be installed on the affected system. After installation, an user can scan the partition where the files are lost within the software interface and recover them with one click of a button. EaseUS DRW (Data Recovery Wizard) even lets you preview the files before you restore them. Another notable feature is its ability to recover files deleted by Shift + Delete keys. The program can also retrieve files deleted in Windows recycle bin.

You can download the data recovery software for free.

Let us know if it works for you.