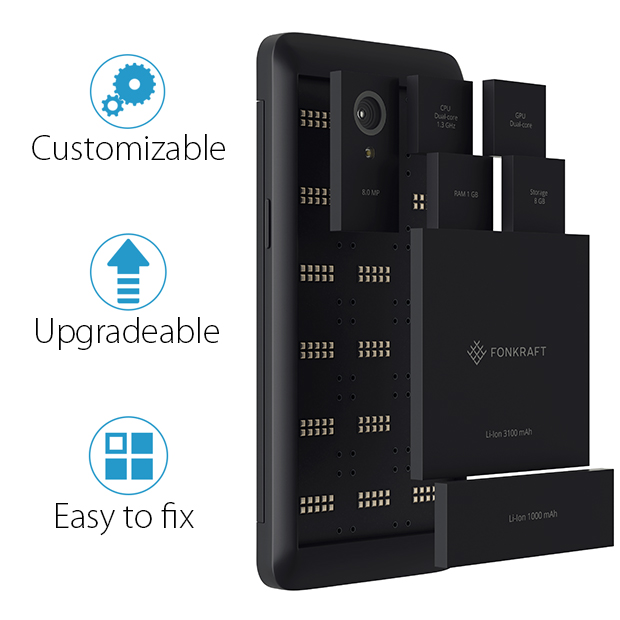 Fonkrant is here to push the world of mobile to an advance level as the firm unveiled the world’s first modular smartphone. You might have heard about Google Ara project, this is much alike. While Google Ara is yet to surface, Fonkrant has taken a quick leap in occupying the empty space.

Fonkrant modular smartphone hardwares can be swapped, replaced, and upgraded to users liking. Unlike normal phones that come with fixed hardware component like camera, RAM, storage capacity, processor, battery, and screen, the Fonkrant modular will allow users to change or upgrade their phones hardware without soldering and wiring. All hardware components are mounted by default and can easily be unmount with a slide of a button, much like how it’s done on PC when you want to change the RAM.

The smartphone comes in three variant, each with different specs and pricing. The basic and cheapest is named Fonkrant Pilot, this carries a price tag of $99 (approx #20,000 NGN). The next is Fonkrant Resolution priced at $199 (approx #40,000 NGN), and lastly the Fonkrant Hifi priced at $199 (approx #40,000 NGN). All the three versions support 4G LTE and runs Android 5.0 Lollipop out-of-the-box. The pricing above is only limited to users who order one before the 30th of April.

The Fonkrant Pilot is aimed for those who wants an extra-ordinary battery life. It includes a 4100mAh battery, which according to the firm can deliver up to 24 days of standby and 30 hours of talk time. It features a 5-inch full-HD (1080p) display with 441ppi pixel density, 1.3GHz dual-core processor, 1GB RAM, 8GB storage, 8-megapixel rear camera, and 2-megapixel front camera.

The Fonkrant Resolution that is the next on the list has the same display used on Pilot but packs a more powerful 2.5GHz quad-core processor, coupled with 2GB of RAM. Other features include 20-megapixel rear camera, 2-megapixel front camera, and 2800mAh battery.

Lastly, the Fonkrant Hifi is specifically meant for audiophiles, it comes pre-loaded with a special Hifi module made out of wood that can render high quality audio playback with supports of up to 192kHz. It sports a 5-inch full-HD display, 2.5GHz quad-core processor, 2GB RAM, 64GB storage, 8-megapixel rear camera, and 2-megapixel front camera.

This is a crowdfunding project and Fonkrant Technologies is offering discounted price (written above) for those who order one before May. The pricing is expected to increase after April, so hurry now and order one on Indiegogo. It will start shipping worldwide in September (free shipping applied).