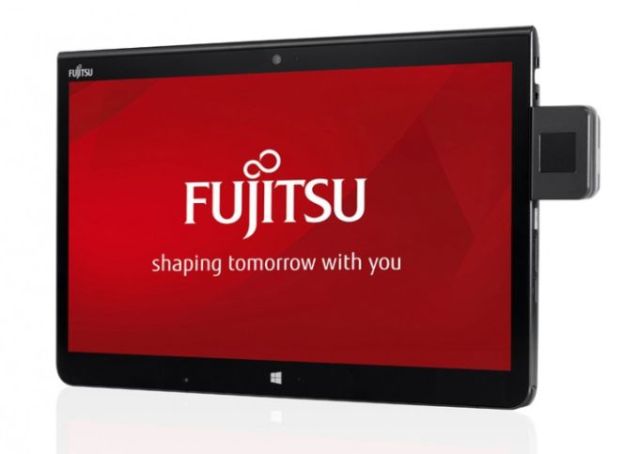 Fujitsu may not be well known when it comes mobile phones, but it unique inventions speak louder in smartphones it had released in the past than other known devices. The company today at the MWC event taking place in Barcelona has announced STYLISTIC Q736, a 2-in-1 Windows 10 convertible tablet.

Unlike what has normally been around (we are thinking of Intel Core m here), the STYLISTIC Q736 is driven by a powerful 6th-generation Intel Core i7 vPro processor with integrated Intel HD Graphics 520, and supports up to 8GB of RAM and up to 512GB of SSD storage. Its major highlight is its security features, the tablet comes equipped with Fujitsu PalmSense technology that can scan veins in the palm when placed on screen for authentication and authorization. Fujitsu claims the new technology offers a more accurate and precise identity recognition than other biometrics, such as fingerprint sensor and iris scanner, that are currently in vogue. In addition, it comes pre-built with TPM security and hard-drive encryption.

The STYLISTIC Q736 features a 13.3-inch IPS anti-glare dual-digitalizer touch display with full-HD (1920×1080) resolution. It sports a 5-megapixel camera at the rear and a secondary 2-megapixel camera at the front. Notably. the tablet has a dedicated SIM slot with supports of 4G LTE, and a MicroSD card slot. Other connectivity available include 3x USB 2.0 ports, HDMI port, NFC, and GPS.

The Fujitsu STYLISTIC Q736 can deliver up to 9.5 hours of use in a single-charge and up to 15 hours when paired with its keyboard that has a separate built-in battery, according to the firm. It will start shipping globally sometime in March. Pricing is not mentioned.