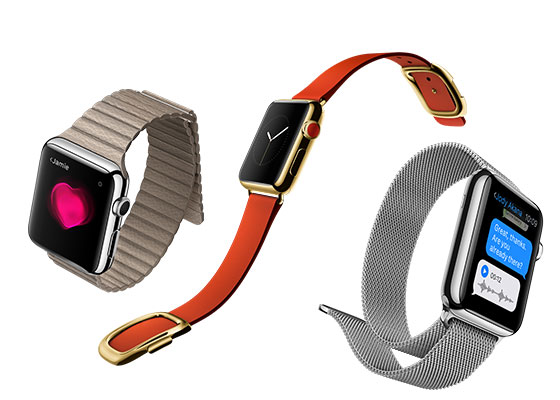 The scheduled Apple event that takes place on Monday brought the long awaiting Apple Watch on stage – the first smartwatch to be launched by Apple. It has been delayed and postponed several times but now it’s finally here. The Watch comes in three variants, each split into two different categories with different price based on their models.

Suprisingly, Apple Watch doesn’t comes with a round face as expected by many (even us) but rectangular face. Sitting below it is a flexible touchscreen retina display, while there is a dial button at the rear right side that Apple calls “Crown”. The Crown makes it look classic on the outside and you might mistaken it as a traditional watch if you don’t take a good look. The Crown handles all form of navigation including, select, pinch to zoom, and scroll up and down. It can also be use to access Home without the need of using the watch touchscreen functionality. There is no keyboard or touchpad onboard for inputing words, writing notes or composing messages, all of these are done by the pre-loaded Apple Siri assistant, letting users can control the watch with their voice. Meaning, you can get your task easily done without pin-pointing the touchscreen with your fingers. Siri and Crown got you covered. Moreover, if you’ve large thumbs or your fingers are kinda flat you don’t need to worry.

The Apple Watch sports a Heart-Rate sensor for tracking and monitoring wearers heart-beat rate. It also includes NFC, this provide an atmosphere for users to use mobile payment options and it can even be use to remotely control NFC-enabled electronic devices such as Home Theaters and Speakers. Accelerometer and Barometer sensors are onboard, while GPS is not included.

The Apple Watch needs a companion for functionality and that’s where the iPhone 6 and iPhone 6 Plus comes in. The Watch itself doesn’t have Apple App store pre-loaded on it, app can be download and sideload to it via an accompanied apps that users will need to install on their iPhone. An 8GB built-in storage also let users store musics and photos. All notifications, including text messages, emails, and calenders, can be read and reply. Notification center allow users to read and access all incoming alerts with their description popping out on the watch display screen. It can be configure to users liking with options of gesture control and smart settings, which includes “Smart Replies” that auto read messages and offers reply options for users to chose and Handoff. The most interesting thing is users can make phone calls and receive calls on Apple Watch.

The customization aspect is not left out. Users can select different faces to make their watch looks different on the surface and can download more faces via App store to their device. The Watch comes pre-loaded with 11 different faces some of which are Astronomy, Solar, Timelapse, Events, and Moon. Different bands colour options are also available for users to chose from or buy, most popular being Modern Buckle, Leather Loop, Link Bracelet, Sports Band, and much more.

As claimed by Apple, the smartwatch can last up to 12 hours in a single charge but we’ll have to wait to confirm how true that is. It can be charge wirelessly through a magnetic inductive charger.

Apple got it right this time and though am a patriotic Android fan, I won’t deny that am impressed. The pricing is spanky when compared with other smartwatches out there i.e Pebble Time, but it does worth it.