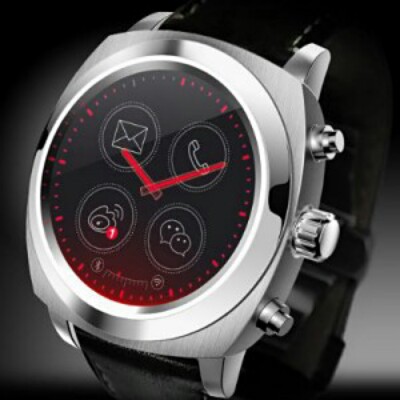 While there are lots of smartwatches being released, only few tends to support multiple mobile operating system. HP smart wristwatch Chronowing, is the first on our list to support both Android and iOS though it seems to go along with fashion trend more than to be a gadget itself. However, a new smartwatch is here to fill the long gap that most smartwatches out there have not been able to make across.

The Geak Watch II is a smartwatch that runs Android 4.3 Jelly bean OS (not Android Wear this time), it is compatible with both Android and iOS devices. It looks much like a normal round face watch, but it has a digital touchscreen overlay. The smartwatch features a transreflective screen and underneath is a mono E-ink display overlay with full-colour LCD. When the watch is in sleep mode the E:ink display comes to life, reflecting the time and date, but upon waking up the LCD display takes over. This of course saves battery. The firm claimed the Geak Watch II battery can last up to 18 days in a single charge.

When connected with an appropriate device, the Geak Watch II can alert you of incoming calls and text messages, and emails, weather and social apps are also onboard. It support Bluetooth and Wifi connectivity and comes with its own app store where users can download third-party apps. Gesture support and motion detector are also not left behind.

Geak Watch II is a crowd funding project that’s currently listed on Pozible. It is expected to kick off in January 2015 with the pricing pegged at $409 in China and $431 in international market.

Montblanc e-Strap Will Turns Your Traditional Watch Into Smartwatch

HP’s New Stylish Smartwatch Works On Both Android And IOS