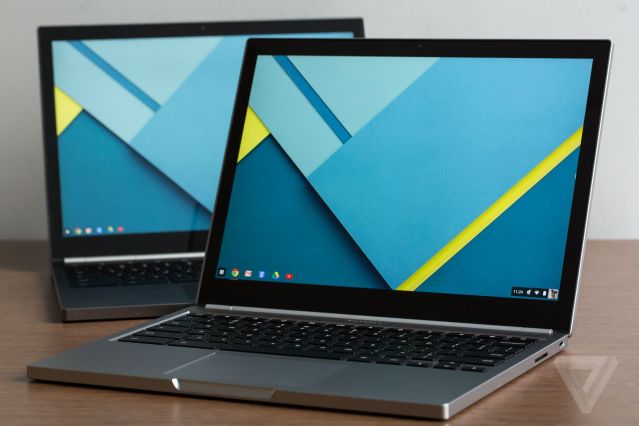 Google has unveiled a new Chrome laptop with the aim of competing with Apple recently launched Macbooks. The Chromebook Pixel is the latest laptop by Google that runs Chrome OS out-of-the-box. It comes with top-notch specifications are lacking in most of the Chromebooks are lacking out there.

The device has a polished aluminium body and glass trackpad. It features a 12.85-inch touch display with a resolution of 2560×1700, and offers 10-point multi-touch. It is driven by a 2.2GHz Intel Core i5 processor, clubbed with 8GB of RAM and 32GB storage.

Read: Acer C720 Is The First Chromebook To Be Powered By Intel Core i3 Processor

Its most notable feature is the two USB Type-C ports that was placed at each side, the likes of which is seen on Apple new Macbook 2015 Editions. The USB-C is a high-speed port that can transfer up to 10GB of data per second and can be use to charge and access multiple device at once (using convertible cords and adapters). Macbooks came with one, but the Pixel comes with two. Battery onboard can last up to 12 hours in a single charge as claimed by the firm. It measures 297.7 x 224.6 x 15.3mm and weighs 1.5kg

The Chromebook Pixel LS version is also available. This is powered by a more powerful Intel Core i7 processor with 2.4GHz clock speed, accompanied by 16GB RAM and 64GB SSD storage.