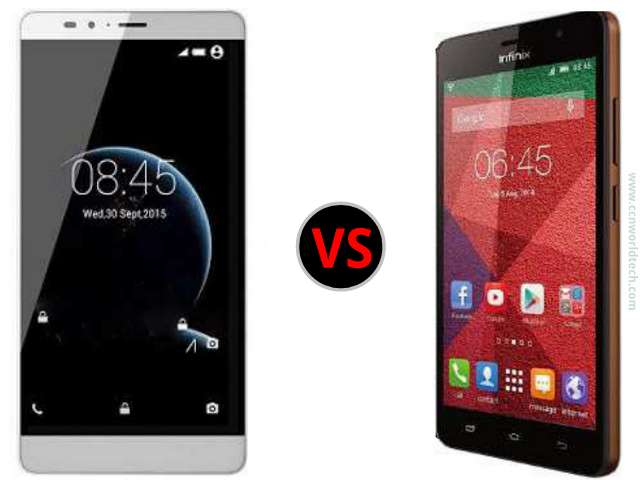 Infinix launched Note 2 X600, probably the last smartphone the firm will released in 2015. The device is here to take on the position of Hot Note X551 with various improvements, new sleek design and an upgraded Android OS version. It “may” as well completely replace it to top the food chain.

We wonder why Infinix decided to remove “Hot” from the naming, leaving just “Note”. Maybe to make it easier to differentiate both or perhaps to make the name shorter we guess. So, for those still using Hot Note X551, you might want to upgrade. But does it deserve it? We mean, dumping your phone or selling it out just to get this. Well, that’s why we want to clarify things here.

What has Note 2 X600 got that is missing in Hot Note X551? Are they similar in one way or the other? What’s the difference? Below, we’ll be comparing the Note 2 X600 and Hot Note X551 key specifications.

Note: Note 2 X600 would have greatly impressed us, but the resolution is kind of disappointing for such a large display. The 6-inch put it in Phablet category, and that means more space to run task and clearer details of what is shown on screen. But this doesn’t changed the clarity, sharpness, vivid of the display when compared with X551. Infact, you’ll hardly notice any difference besides the screen size. If you prefer compact stick with X551, but if you want something a bit larger, go for X600.

Note: Hot Note X551 seems to be topping the line, but that is if you didn’t notice the difference in their processor. The Note 2 X600 packs a modern 64-bit chipset with improved Graphics while the chipset in X551 is a bit outdated. To be realistic, you’ll experience smoother performance on X600 than on X551. Also, there is an increase in RAM capacity, which is a good thing when it comes to multitasking and gaming, though both comes in two versions with different RAM capacity, 1.5GB/2GB for X600 and 1GB/2GB for X551.

Note: The back camera has been upgraded from 8MP to 13MP. This is considered good. More scenes to capture, larger resolution of image output, and probably better picture quaility. We don’t know why Infinix still sticks with 2MP for front camera, selfie fans aren’t going to like this.

Note: Nothing changes here. Both are expandable and has enough storage to host multimedia files and data.

Note: We can’t consider the 40mAh difference as an upgrade. Just a change of digit. However, looking at their display properties and processor, the Note 2 is likely to have the same battery life as Hot Note. When it comes to a good battery life, you can count on both. We are talking about roughly 3 days of talk time. Notably, both support fast charging.

Note: Another reason you might want to consider X600 is the latest Android operating system version it runs. Which means more features, customization, improved security, and easier access of use.

If you’re willing to make the jump, it probably worth it. Though sacrificing additional #4,300 NGN just to get 500MB RAM and 4G LTE is not on our list, but may be on yours. It is time to upgrade, what do you think?