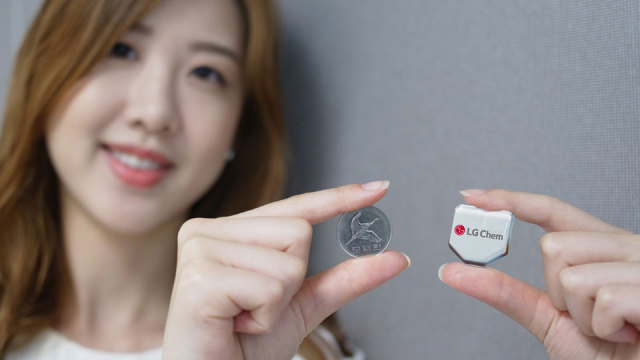 Battery durability, capacity, size, and weight are one of the major problems tech industries are facing, because without it nothing much can be achieve. It’s like saying human does not need an oxygen to survive. While many experiments have been done in the past and some are still at work, non has yet to surface to replace the traditional Li-ion and Li-polymer battery we are stuck with since a century.

Size is now one of the factors tech companies consider during production, ofcourse, we can’t compare the size and weight of mobile phones produce twenty years ago to what are being manufactured now. We want something slimmer, lighter, and compact, but the size of a battery does have a major role to play to achieve that.

Rectangular, circular, and square-like battery are what we were familiar with, they’re the basic standard of all batteries manufactured till date, but LG has taken a step further by re-constructing the shape of battery thereby saving more space in gadgets they’re being used.

LG Chemical, a sub-brand of LG Technologies, has announced the world’s first hexagonal (6-angle) battery, aimed to be used in their upcoming smartwatches and other products. The firm claims that the new battery can deliver 25% more of battery life over regular ones. Also, it can easily fit into any space.

LG has patented the technology which it calls “Free Form Batteries with Stack Folding Technology”. The firm doesn’t have it in mind to stick to hexagonal shape only, but to release more patterns. This include “L shaped” and “U shaped” batteries as time goes on. The battery are being produced in China and have started shipping globally.