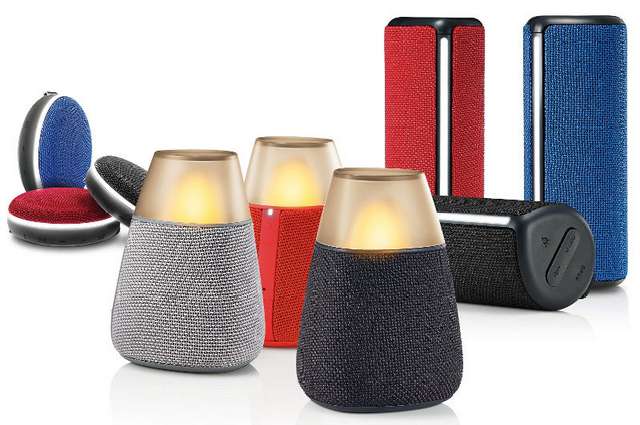 Ahead of IFA event schedule to begin at the end of this month, the South Korean technology firm LG today has unveiled four new portable Bluetooth speakers under its newly created “PH series” namely PH1, PH2, PH3, and PH4.

The PH1 isn’t the smallest and the lightest as could be expected due to their naming, but it is friendly enough to be carried around without feeling its heaviness, though this has a negative impact on sound output and bass it can render due to the size and wattage of the speaker it packed inside. It is Bluetooth enabled and can be paired with smartphones and other Bluetooth enabled devices. It also has a 3.5mm audio jack for wired connection.

Much like the PH1, the PH2 is also pocket and pulse friendly in size, measuring 3.8 x 1.5 inches and weighing 167 grams. Notably, it is the smallest and the lightest among the four. It has a 2.5W amplifier, which should be enough to render bass audible to ears nearby. A carrying strap is included and it is splash-proof certify. Battery onboard is claimed to last up to six hours in a single charge.

Closely following is the PH3 which is explicitly different from the other two mentioned above. It is larger (not that big) and comes equipped with a more powerful 3W amplifier, this should produce bass good enough to pound listening ears. Flaunting a design that looks like a candle when behold, the candle top is beautify with five different multicolored lighting modes that shines and dance through the dark. Due to its large size it is able to pack enough battery to keep it going for 10 hours in a single charge.

Lastly, the LG PH4 is the tallest among the four but not that robust in width when compared with PH3. It is also the most powerful. Packing a 16W amplifier enhanced with dual passive radiator, bass produce through this speaker should be strong enough to knock on ears in a distance. Despite its power-consuming amplifier, the PH4 can still manage to deliver up to 10 hours of playback as well.

The LG PH2, PH3 and PH4 Bluetooth speakers offer 360-degree sound and comes with bass-boost settings to further get more out of them. These can be paired with two Bluetooth enabled device simultaneously and also sport 3.5mm audio-out jacks for connecting with older media device like MP3 player.

LG is yet to reveal their pricing, but they are expected to be showcased at IFA next week.