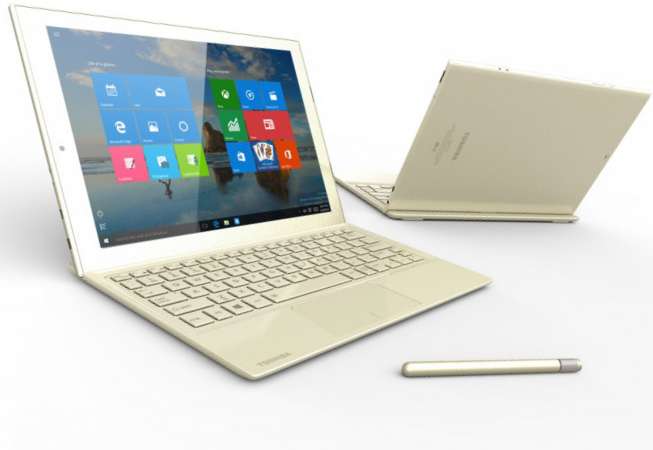 There has been an increase in production of 2-in-1 tablets (known as convertibles by some and hybrid systems by others) as people moved from classic bulky laptops we are used to in the past to ultra-thin slender powerful machines that can be operated with one hand. Size does not limit performance of a machine these days as chips gets smaller, display gets thinner, and motherboards gets lighter. Technology industry is evolving to a world where laptop may go into extinction and 2-in-1 will take it stead.

With Windows 10 out-of-the-hood few months back, many firms are now diving into the core of centralizing a laptop with a tablet. The growth have increased indeed, but not yet reach its peak. Toshiba is one of those embracing the moment, believing that size and weight does not matter much when it comes to performance as well as flexibility. The company has announced a new 2-in-1 which it claims the lightest among its rivals with it 569 grams weight, the Dynapad. Even iPad Pro couldn’t beat that.

The lightness is not the only thing Toshiba Dynapad is boasting of, its thickness is also a mark among the sand of time in which only few (such as iPad Pro) had tread, packing a 12-inch display in a 6.9mm thin body, while maintain a WUXGA+ (1920 x 1280 pixels) resolution. The accompanied high-precision Stylus dubbed “Wacom” put the display into good use with “Active Electrostatic TruPen” technology with 2,048 pressure of sensitivity, while the detachable keyboard is as slender as the tablet itself.

The Toshiba Dynapad is expected to go on sale in the U.K in first-quarter of 2016, after which it will roll out to other markets. No details yet on its pricing, and its technical specs is still under cover, something we’ll have to bring to you when it nears its launch date.