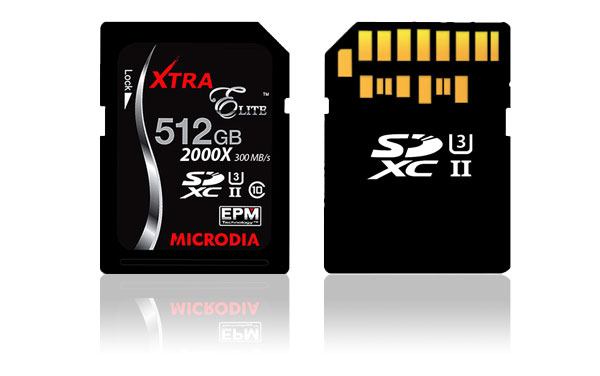 At Computex event hosted by Asus this weeks which ends today, a California-based firm known as Microdia launched the world’s first 512GB MicroSDXC card named Xtra Elite UHS-II. This is more than twice the amount of storage of 200GB MicroSDXC card launched by SanDisk at MWC in March.

The Microdia 512GB Xtra Elite uses SDXC 4.0 UHS-II (Ultra High Speed) standard that is capable of rendering data transfer speed of up to 300Mbps, which is thrice the speed of what SDXC 3.0 UHS-I standard can offer. An additional row of pins is placed below the standard pins usually seen at the tip because of the SD 4.0 standard it use.

While new memory card by Microdia can’t be use in low-end smartphones, it’ll readily work in high-end ones like LG G4 that support external storage of up to 2TB (don’t even think of Galaxy S6). Microdia however said that the 512GB SDXC card is aimed at professional photographers. This gives them more sufficient space, and high data transfer speed onboard also saves them time.

The firm didn’t give its specific price, but it said it will cost about $1,000 USD (Roughly #200,000 NGN). That is enough to buy two iPhone 6 and still have some change left to buy a wallet. 512GB of storage in a piece of plastic, that’s a great achievement indeed.