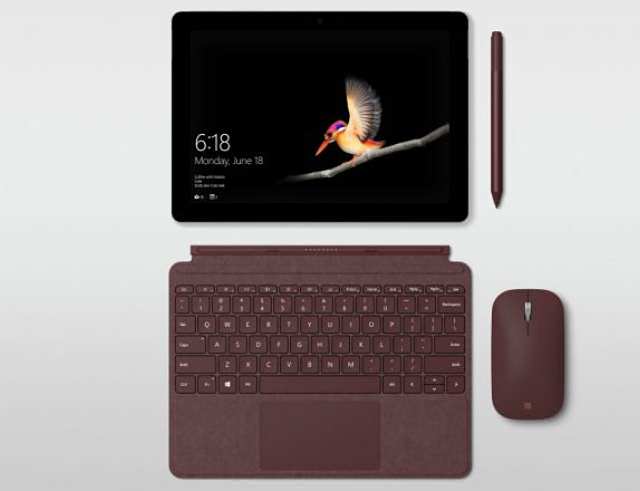 It has been a while since we heard from Microsoft in the mobile segment, but the company is changing that today. Today, the company has announced a new Surface device for the global market called “Surface Go”, a 2-in-1 hybrid tablet that runs Windows 10 OS out-of-the-box. It seems Microsoft is borrowing the word “Go” from Google’s Android ecosystem considering this is the cheapest Surface tablet that the company has ever launched.

While Google’s Android Go is made “only” for the entry-level market both in hardware and software and solely reflects this in every aspect of the device, the word “Go” in the new Microsoft Surface tablet naming only depicts its low price while maintaining an all round balance in features and functionality. The device inherited the look and feel that are known for the Surface series without compromising on price.

Straight out-of-the-box the Surface Go is pre-installed with Windows 10 with S-mode enabled by default, which limits some core functionality of the operating system, but users can upgrade to a full version of Windows 10 if they so wish without any additional cost attached.

Technically, the 2-in-1 features a 10-inch multi-touch PixelSense display with a resolution of 1800×1200 and an aspect ratio of 3:2. The display is touch-sensitive and can be use with a Surface Pen that supports up to 4096 levels of pressure sensitivity for writing, drawing, and sketching. There is a Pen holder at the side of the tablet to keep the Surface Pen safe while not in use. Microsoft, however, does not mention if the Surface Pen will be bundled along or purchase separately.

The display can tilted for ease of view in different positions when attached to the keyboard, and there is an adjustable kickstand at the back that provide comfort for the tablet to rest on, as seen in some of their previous release.

Powering the device is a 7th-Gen Intel Pentium Gold (4415Y) processor, coupled with 4GB of RAM and 64GB of eMMC 5.1 storage. For those who wants more there is also an 8GB RAM model packing a 128GB of SSD storage, though you will need to shed more to get that. There is also a Windows Hello camera at the front that supports facial recognition.

For the moment, only the WiFi model of the Surface Go will be available for consumers, but the company planned to release the LTE model before this year runs out. The WiFi and LTE model only differs in network connectivity; the later offers a SIM card slot and comes with an inbuilt LTE modem while the former does not.

Speaking of connectivity, the Surface Go supports Bluetooth, WiFi, 4G LTE (LTE model only), USB 3.1 Type-C, Surface Connect, 3.5mm audio jack, and a MicroSD card reader. Battery onboard is claimed to deliver up to 9 hours of use in a single charge.

The new Microsoft Surface Go WiFi model with 4GB RAM+64GB eMMC storage is priced at US$399, while the 8GB RAM+128GB SSD model costs US$549. It will be available in the U.S, Canada, U.K, Ireland and several European countries including France, Germany, Spain, Poland, Portugal, Netherlands, Belgium, Austria, Switzerland, Finland, Norway, Sweden, Luxembourg, and Italy from August.