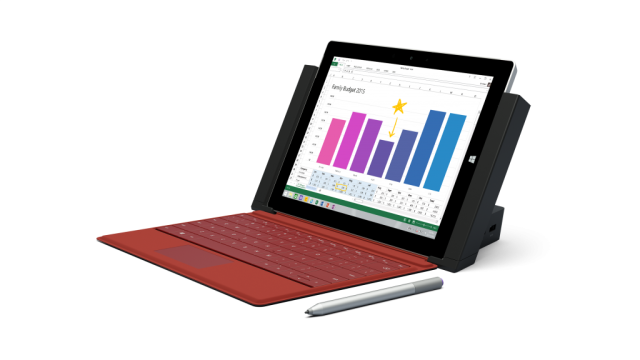 Microsoft has launched a new high-budget Windows tablet, the Surface 3. The device was announced by the firm earlier today and it’ll go on sale starting from the first week of May. The Surface 3 comes in two variants with each variant split into two models based on the amount of storage onboard. The Wifi-only version with 2GB RAM and 64GB storage is priced at $499 USD, the cheapest on the list. Closely following is Wifi-only version with 4GB RAM+128GB storage priced at $599 USD. The LTE variant with nano SIM card slot and 2GB RAM+64GB storage costs $599 USD, while the 4GB RAM+128GB storage model is priced at $699 USD.

The Surface 3 is claimed as the thinnest and lightest tablet ever shipped by the firm and is more affordable than its predecessor, the Surface Pro 3 that was launched in May last year. Specwise, the Surface 3 features a slightly smaller 10.8-inch HD (720×1280 pixels) display when compared to 12-inch (2160×1440 pixel) featured on Surface Pro 3. It supports 10-point multi-touch and has a stylus pen that users will have to purchase separately at $50 USD.

Under the hood, the tablet is powered by a quad-core Intel Atom X7-Z8700 processor clocked at 1.6GHz, that can turbo boost up to 2.4GHz. Windows 8.1 governed all internal activities and the pre-loaded Dolby Audio system further enhanced audio sound quality hushed out through the stereo speakers onboard. The Surface 3 sports an 8-megapixel rear camera with full-HD (1080p) video recording capability, and a 3.5-megapixel front-facing camera.

Connectivity options included are USB 3.0 port, Wifi 802.11 a/b/g/n/ac, Bluetooth 4.0 with LE, and Micro-USB charging port. The LTE variant includes GPS and 4G LTE. According to Microsoft, the Surface 3 battery can last up to 10 hours during video playback.