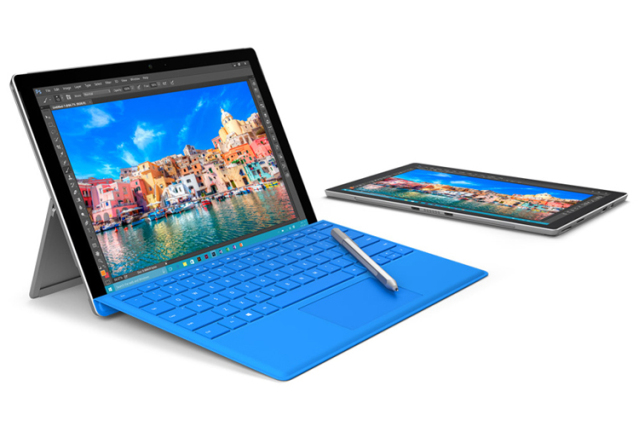 Microsoft has officially launched Surface Pro 4, its latest 2-in-1 high-end tablet in an event organized by the company today. Microsoft has stepped up its game in the new model compared to its predecessor. What you’ll first notice when holding the device is its extreme lightweight curved premium aluminium body and sleek design. The Surface Pro 4 is 0.7mm thinner than its predecessor that has a thickness of 9.1mm, but that doesn’t stopped it from having a slightly larger 12.3-inch screen with 2160 × 1440 pixel resolution that translates to roughly 267ppi pixel density.

The design is not only the fascinating aspect, residing inside its main core is the new Intel Skylake processor, which offers higher performance when compared to the chipset found in Surface Pro 3. According to Microsoft, the Surface Pro 4 is 30% faster than Pro 3 and 50% faster than Macbook Air. We’ll have to wait to confirm how true that is, the second statement we mean. As expected, the Surface Pro 4 runs Windows 10 out-of-the-box.

Microsoft also introduced a new display technology in its latest convertible tablet called “PixelGlass”, that has 1024 different level of pressure sensitivity. This is way to far from what Force Touch can offer. In camera aspect, the device houses an 8-megapixel camera at the back, while it is equipped with a 5-megapixel camera at the front. The front camera is integrated with Microsoft new “Hello Facial Recognition” feature that let users authenticate using their face. It also has a fingerprint sensor for smart security and advance authentication.

The Surface Pen included has been upgraded too, it now have a new eraser tool and can be magnetically attach to a provided resting place on the tablet. The Surface Dock that comes along has 4x USB 3.0 ports, 2x DisplayPort, and Ethernet port, but there is no USB Type-C.

The device will be available starting from October 26 in selected markets. The Surface Pro 4 comes in different configurations, ranging as high as 16GB RAM and 1TB storage. Price starts at $899 USD (#179,000 NGN).