Africa is home to some of the most beautiful, amazing, very unique and iconic  animals. You will hear often about “Most Beautiful Animals In Africa”. These were traditionally the most interesting animals to watch and you will like visit Africa because of these animals. 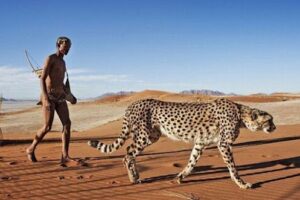 However, we shall be  grouping  these  Animals in their various nature but before we do so, lets understand the general overview of  African Animals.

Among the most well-known species are the lion and the rhinoceros, but you can also see the largest land mammal in the world, as well as the fastest.

Africa is the second-largest continent in the world, and it’s diverse in culture and natural beauty, but it’s also home to many unique species.

In fact, among the top reasons to visit some of the countries here would be to marvel at the wildlife, and there is no denying that Africa is home to some of the most majestic animals in the world.

As for why it’s worth seeing these remarkable animals in their natural habitat, well, that’s because it would be an unforgettable adventure, but also an educational one.

And the opportunity to see these animals roaming around in the wild may not be there in the future because there are several which are listed as vulnerable and endangered.

Tourists have chosen African countries as their go-to destinations for safaris, according to The Conversation, and this allows them a once-in-a-lifetime opportunity to see animals that they have probably only seen in zoos or on television.

Tourism is also important for the countries that are visited and oftentimes helps with conservation efforts.

The most safe African countries for Tourist includes:

MOST BEAUTIFUL ANIMALS IN AFRICA:

Below you can find a complete list of African beautiful animals. We currently track 26 animals in Africa. You can study our comprehensive list below: 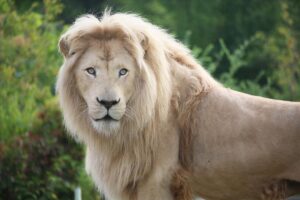 The King of the Jungle, the second finest and largest feline after the Tiger, the Lion is today considered a vulnerable species, with its population decline of thirty to fifty percent in the last 20 years. 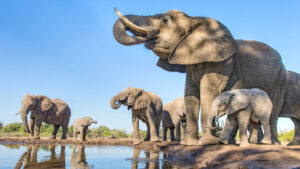 With elephants being the largest creatures on land at the moment, it’s no wonder the elephant babies weight 100 kilograms at birth. But did you know the gestation period lasts for 22 months? 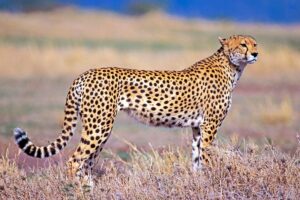 This large feline is the fastest animal on land running with a speed up to 120 km/hour in short 500 meter bursts. It can accelerate from 0 to 100 km/hour in 3 seconds. They have non-retractable claws so they can’t climb tall trees. 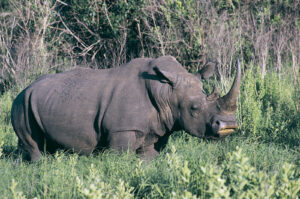 Rhinoceros are large plant eating mammals which are able to reach more than a tonne in weight. They have thick armor like skin, small brains that can weight less than a kilogram and no knees. 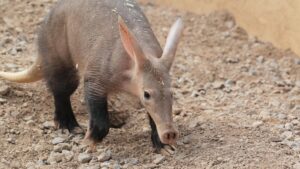 This medium sized nocturnal mammal, native to Africa, only eats ants, termites and one type of cucumber, called Aardvark cucumber. It is believed by African magicians to have magical powers. 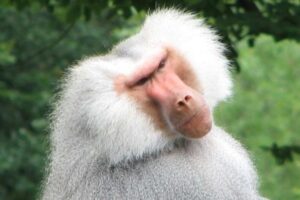 These monkeys are furry and noisy, but very caring for their young. They are omnivore foragers, but are also known to eat sheep, goats and small antelopes. In Egyptian folklore, Baboons were considered sacred animals. 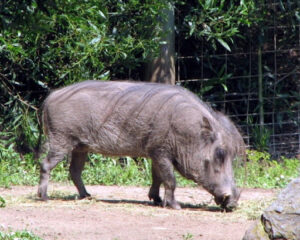 While some say this is not the prettiest pig relative out there, we just can’t ignore his resemblance to Pumba (the Lion King character). We think it’s quite a character with its huge tusks and unwavering care for it’s young. 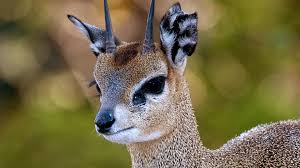 These half meter tall antelopes can fit all four hooves onto a piece of cliff the size of a coin and never have to drink water, since the succulent plant they forage on provides them with sufficient water. 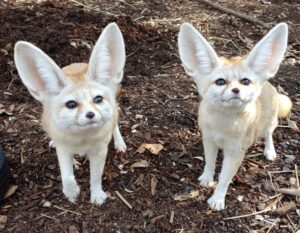 With a total body length between 24 and 40 cm, this big eared guy is the smallest fox there is. Their ears help them detect insects and rodents hiding underground. 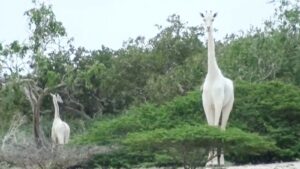 With it long neck the giraffe can reach the tallest and tastiest leaves in the savanna and also engage in “neckings”, a type of male combat in which the neck is used as a weapon. Vulnerable to predators as an adult, calf giraffes are hunted by lions, leopard and hyenas.

Did you know there’s a special hotel in Kenya where you can feed giraffes from your hotel room window?! 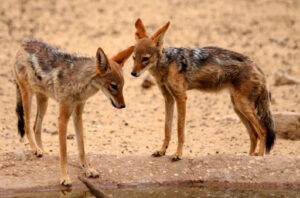 These far away relatives of the wolves are crepuscular, being most active at dawn and dusk.

They are scavengers and hunters of small animals. In oriental mythology jackals are clever sorcerers, while in Egyptian religion they are Gods of the afterlife. 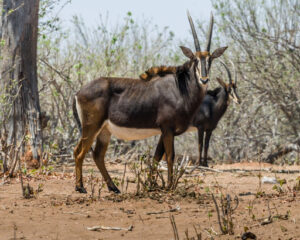 These antelopes can reach a height of up to 140 cm and their horns can be as long as 110 cm. When fighting, male sable bulls drop to their knees and use their horns to fight. 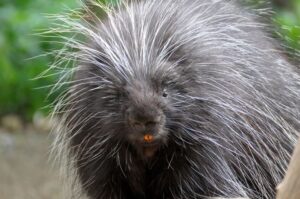 Porcupines are rounded, large, slow rodents. Their body is covered with large, pointy spines. Porcupines are salt lickers and will lick and eat anything that is covered in salt, from household items such as tables or clothes to vehicle tires coated in road salt. 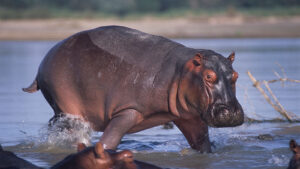 Hippos are large, mostly herbivorous,  semi-aquatic mammals. Despite their pig-like appearance their closest relatives are whales, from which they diverged some 55 millions of years ago. 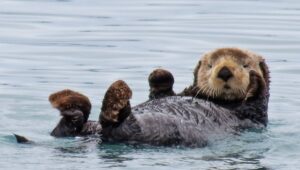 Otters are semi-aquatic mammals which feed on fish, birds and small mammals. They are also the best swimming teachers out there. 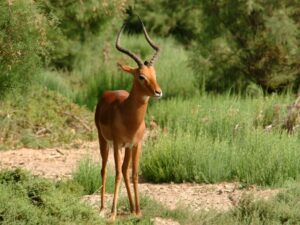 One of the most abundant antelopes in Africa, the impalas, can grow up to 95 cm tall. Only the males have horns, which they use in territorial battles. 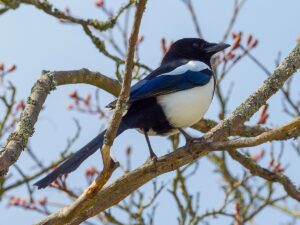 Magpies are easy to spot thanks to their black and white colourings. Normally, they collect objects found such as jewels or plastics and save them in their nest. Their diet includes seeds, eggs, nuts, insects, and fruits. 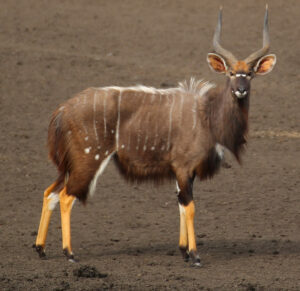 This medium sized antelope prefers a deep forest to any plain there is in Africa. While the females are warm brown and horn-less as the nyala pictured below, the males are dark skinned with long spiraled horns and a woolly fringe on their belly. 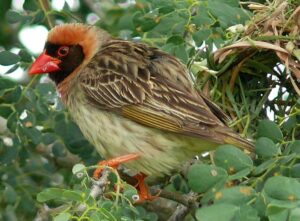 Also known as Red-billed Quelea or Red-billed weaver, is a small bird from the weaver family. It can be found in the Sub-Saharan Africa and is considered one of the most plentiful wild bird breed in the world. 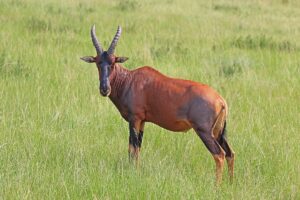 Topis are some of the fastest antelopes, reaching a speed of up to 70 km/hour when pressed. The Maasai describes them as wearing a suede jacket, blue jeans and yellow boots. 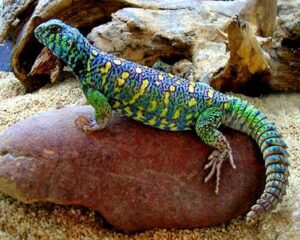 These animals are spiny-tailed lizards found in Africa and are active during daylight time. Usually, Uromastyx eat plants or seeds. 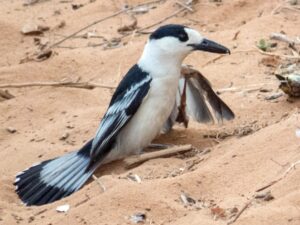 These small birds from Africa varies in color and size. Tend to nest in pairs and like to eat earthworms, insects, and lizards. 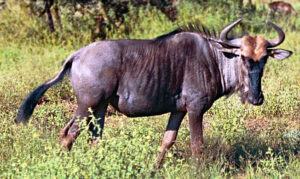 A relative of the bull, the wildebeest or the Gnu is a large game animal. Wildebeest are killed for food, especially for making the Southern African delicacy biltong (dried game meat). 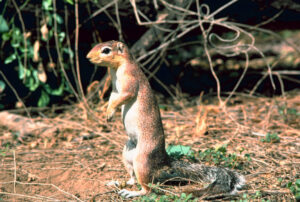 Xeruses are ground squirrels that live in rocky deserts around Africa. This African animal is well-known for being social and living in groups. 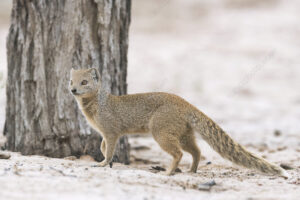 Close relatives of Meerkats, Yellow Mongooses are very attentive little creatures, also using a sentinel to keep eye on eventual predators, such as birds of prey. They eat insects, small rodents and birds. 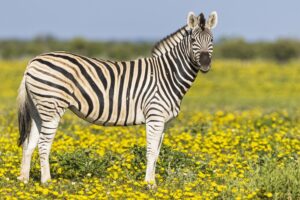 Relatives of the most common horse, zebras are very unpredictable animals and don’t cope well with stress, the reason for which they could never be domesticated. Their famous stripes are different and unique to each individual, just like a human fingerprint.