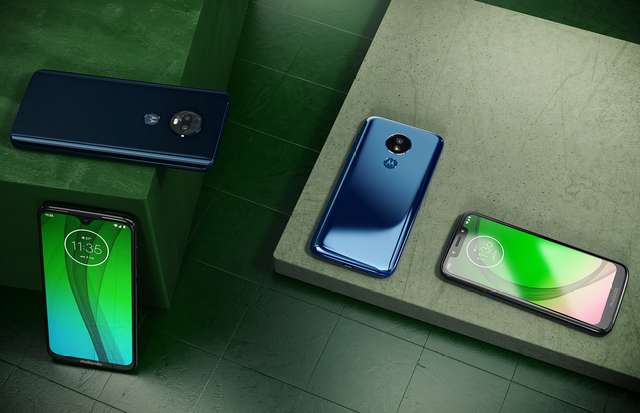 The Moto G7 and G7 Plus are identical in some areas – they shared the same 6.2-inch Full HD+ (2270×1080)  LCD screen that is Gorilla Glass protected and 3000mAh battery, but the Plus model is powered by a Snapdragon 636 chipset, which is slightly more powerful than the Snapdragon 632 chipset that is inside the Moto G7.

Moreover, the dual camera that resides at the back of the phones and the front camera are different in configuration. While the Moto G7 sports 12MP(f/1.8) + 5MP(f/2.2) dual camera behind and an 8MP(f/2.2) front camera, the Plus variant scaled up a bit by boasting a 16MP(f/1.75) main camera in addition to the secondary 5MP depth-sensing camera at the back, while the front camera uses a 12MP(f/2.0) sensor.

The features they further shared together includes water-repellent nano coating, 4GB RAM, 64GB expandable storage, dual stereo speakers, and 3.5mm audio jack. The wired and wireless connectivity on both device are the same as well. The Moto G7 Plus supports the new 27W TurboPower charging mode that can render 12 hours of use with just 15 minutes of charging, while the G7 comes with a 15W charger.

The Moto G7 Power impress with its gigantic 5000mAh battery that is claimed to render 60 hours of use in a single charge. It however settled for a lower 6.2-inch HD+ (1520×720) LCD display that is Gorilla Glass protected and a Snapdragon 632 chipset. It has a single 12MP camera at the back and an 8MP camera at the front. 3GB RAM and 32GB storage are the only options, while there is no stereo speakers onboard. Fast charging is handled by a 15W charger with supports for Quick Charge 4.

The Moto G7 Play is the smallest of them all and is aimed at basic smartphone users. It features a 5.7-inch HD+ (1512×720) LCD display with Gorilla Glass 3 protection, is powered by a Snapdragon 632 chipset coupled with 2GB of RAM and 32GB of expandable storage, sports 13MP/8MP front and rear cameras, and is powered by a 3000mAh battery with supports for 10W rapid charge.

The phones will be available from today in Mexico and Brazil, and from there will roll out to Europe, Asia, Latin America and North America starting from mid-February.