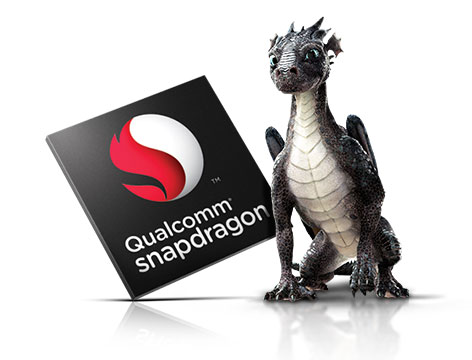 Qualcomm has said in New York that its new Snapdragon 820 processor will deliver better battery life, more efficiency, faster performance, and more.
But what innovations is the company promising with the new processor, and how will it affect the way you use your phone when you upgrade in 2016?

The new processor is promising much better Wi-Fi for users, thanks to the inclusion of the new wireless protocol: 802.11ad.
The wireless speed is expected to be rolled out over the next couple of months and follows on from 802.11ac that started rolling out in phones and routers over the last year.
If you have a supporting router, you’ll be able to transfer data to your device around 20x faster than you were previously able to do.
In real terms, that means a full-length feature movie will take about 30 seconds to transfer. It also means you’ll be able to create devices like a wireless docking station that ditches wires but still allows you to connect a series of devices (like a keyboard and TV screen) without wires.
Qualcomm said manufacturers are already keen to jump on board and we could expect new wireless docking stations by early next year.

Qualcomm has enhanced the graphics capabilities of the 820 processor, adding support for the new Unreal Engine 4 from Epic as well as tweaking some technologies themselves. New buzzwords include Qualcomm Trupallette and Qualcomm Ecopix. Both work to improve the quality of the graphics on screen, but Ecopix will adjust light by changing the gamut levels of the images rather than boosting the brightness of the screen.

Qualcomm is introducing two new technologies on the audio front. The company dubs its advancements in audio as immersive audio, promising a superior audio playback experience, which will give you a greater sense that things are happening around you. That could be a bee buzzing around a room or an explosion happening behind you.
While 5.1 surround sound is already possible on phones, this seemingly takes it one step further by ensuring you are in the middle of the action with a greater potency to the experience.

The second is aimed at speaker protection and ensures you still get a loud sound, but one that doesn’t distort. Both in the flesh work really well.

Battery life is always an issue, and Qualcomm says it is working hard to give you more time to use your phone or tablet before it runs out of power.
While efficiencies will get you so far (the Snapdragon 820 supposedly is 30 per cent more efficient), it is also making it easier to charge devices.

A new WiPower charging mat will work with 820 powered devices. The mat can be hidden under a desk out of sight, charge metal-cased devices (previously impossible), and even charge multiple devices with different needs at the same time without having to line up charging points.

Also, Qualcomm has introduced Quick Charge 3.0. It’s a new version of the technology found in devices like the Moto X Pure and HTC One M9, and it promises to be able to charge your device to 80 per cent full in 35 minutes.

The Snapdragon 820 can deliver download speeds up to 600Mbps and upload speeds up to 150Mbps (LTE Cat.12).
Carriers in the US, China, India, and South Korea will be able to instantly benefit from those transfer speeds when 820 devices launch in 2016, but for the UK, the only carrier that will be able to currently utilise those speeds will be EE. But not straight away.
The UK carrier offers 450Mbps in some parts of central London, and Qualcomm tells Pocket-lint this could easily be boosted to 600Mbps with a software update.

Elsewhere, the modem is able to now monitor the quality of the Wi-Fi signal to determine what’s better: Wi-Fi or 4G. And then it automatically switches accordingly on the fly. Unlike current Wi-Fi-calling features in the UK, this would allow you to seamless handover between the two without you realising. The company is also improving how it handles and manages the antenna within the device to put an end to dropped calls.

Rather than rely on hardware improvements like better lenses or image sensors, the Snapdragon 820 tries deliver many of the imaging improvements through software algorithms.
One in particular is how it will be able to handle low-light photography and video. Rather than simply apply an HDR effect to images, the new processor works to “lighten” elements of the image that need “lightening” without overly affecting already light areas of the image (like a street light).

What’s impressive is that it is able to do this in real time and with zero latency, making it ideal for shooting videos or photographs in environments that are anything but ideal.
The company is also bringing its Zeroth picture management feature to Snapdragon 820. It will use machine-learning to allow you to manage your pictures – by scanning them to see what’s in them.

The system can already categorise over 60 different things, such as food, animals or kids, but it also has the ability to learn as it handles more data. The system is localised to the device, so you won’t need to constantly upload images to a central service, and could mean you’ll be able to quickly and easily find a photo in the future.

Two new technologies – that have been demoed before as prototypes – now make it into the final commercial 820 offering.
Sense ID is Qualcomm’s version of Apple’s TouchID and can cope with not only sweaty fingers but also work through cover glass, meaning phones won’t need a dedicated button, as it can be hidden under the display.

Smart Protect will use machine-learning to scan for what it believes is viscious malware on the phone (even if the malware hasn’t been reported previously). The processor will then be able to make an educated guess as to what threat levels the malware presents and act accordingly.