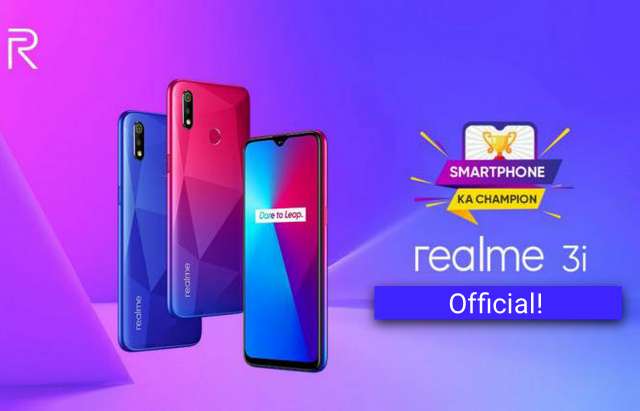 Entry-level Realme 3i today becomes official in India after much teasing by the firm in the past few weeks. The device, made to be a cheaper replica of the Realme 3, features a 6.22-inch IPS display with HD+ (1520×720) pixel resolution and 450 nits of brightness, protected by a Corning Gorilla Glass 3. The Waterdrop notch is here to stay to compliment the prominent chin that earned the phone an 88.3% screen-to-body ratio.

A 13-megapixel selfie-focus camera with an f/2.0 aperture resides inside the notch, while dual camera is equipped at the rear. The main camera at the back has a 13-megapixel sensor with an f/1.8 aperture, while the secondary is a 2-megapixel depth sensor with an f/2.4 aperture for taking portraits shot. Realme revealed that the cameras have AI built into their software to enhance photography. The front camera have AI Beautify and AI Facial Recognition that can scan 256 facial points. which also improves the face unlock security system.

Speaking of security, in addition to face unlock, the Realme 3i also has a fingerprint sensor at the back. The overall hardware relied on a MediaTek Helio P60 octa-core processor clocked at 2.0GHz, coupled with Mali-G72 MP3 GPU. The phone comes in 3GB RAM+32GB storage and 4GB RAM+64GB storage versions, both expandable via MicroSD card up to 256GB.