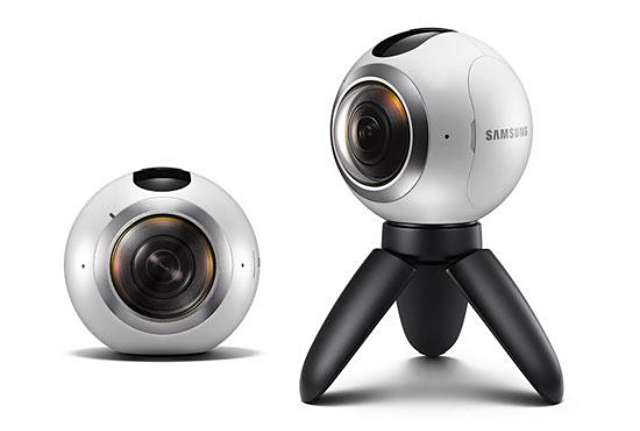 Samsung has officially launched its first 360-degree VR camera the Gear 360 today in Korea. The device which was first showcased at the MWC event in March, sports two fish-eye camera lens placed opposite each other, having 15-megapixel image sensors that can record high-resolution video of 3840×1920 pixel and capture large still image of up to 25.9MP.

Each camera lens can capture 180-degrees horizontally and vertically to create a complete 360-degree footage. To further help capture beautifully in low-light environment, the cameras have f/2.0 aperture. The Gear 360 can be paired with supported Samsung smartphones such as the Galaxy S7, S7 Edge, S6, S6 Edge, and Note5 via Bluetooth, and then using the WiFi Direct feature of the connected smartphone to transfer files. When connected, the phone can also be use as a remote viewfinder.

The Gear 360 is waterproof and dustproof certified with IP53 rating, and includes a MicroSD expansion slot with support of up to 128GB. It is powered by a 1,350mAh battery.

The Samsung first 360-degree VR camera is priced at KRW 399,300 ($350 USD) and is available in Korea via the company online store. It will be available globally starting from May.