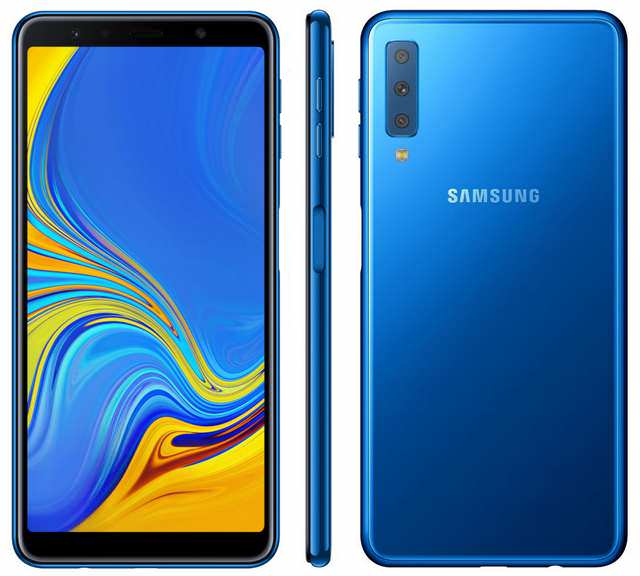 Samsung first smartphone with triple rear camera has just goes official. The Galaxy A7 (2018) as called was unveiled by the firm today after much leaks in the past few days. The phone brings with it three cameras at the back, a trend that was started by the Huawei P series.

The camera arrangement are unlike the Galaxy S and Note series, but rather, it follows the common pattern that is not so distinguishable from the rest of the Android phone community. No special treat. On the upper left at the back laid rest the triple camera, vertically aligned with a single LED flash placed beneath.

The camera properties are quite good on paper—the primary camera features a 24MP sensor with an f/1.7 aperture, the secondary camera an 8MP sensor with a 120-degree ultra-wide angle lens, while the third camera has a 5MP sensor for capturing depth of field. There is also a 24MP camera at the front with a LED flash.

The Galaxy A7 (2018) (SM-A750F) comes with a 6-inch Super AMOLED display with Full HD+ resolution, driven by an unspecified 2.2GHz octa-core processor. 4GB and 6GB are the RAM options with 64GB and 128GB storage tagged along. The storage are user expandable up to 512GB via a MicroSD card.

The fingerprint sensor of the phone is side-mounted, no in-display fingerprint sensor. Samsung is still holding on fast to the 3.5mm audio jack, which is located at the bottom beside the USB port. The sound quality is handled by Dolby Atmos for richer listening experience, although there is no stereo speakers onboard.

In connectivity, NFC is optional while others including Bluetooth 5, WiFi 802.11ac, and 4G VoLTE are ever present. The Galaxy A7 (2018) draws its power from a 3300mAh battery with fast charging supports. The phone has a glass back but lacked wireless charging.

The Galaxy A7 (2018) pricing starts at €349 ($407 USD). It will be available in Black, Blue, Gold and Pink colors when it starts selling in October in select Europe and Asia countries.