Premier Information and Tech How Tos Online
Home Mobile Samsung Galaxy Note10 and Galaxy Note10+ Official – Everything You Need to...

Wednesday sees to the unveiling of Samsung most anticipated smartphones of the year, the Galaxy Note10 and Galaxy Note10+, The tenth-edition of the Note series brings improved S Pen, 7nm chipsets, and Dynamic AMOLED screens that first made the first appearance on the S10’s. The phones still retain the rectangle-ish slightly curved body known for the Note series, but they have passed through some modifications to make them standout from the rest of the Galaxy Note series.

The foremost thing are their thinner bezels and the punch-hole notches that are centered at the top of their screens. While the 2019 models of some of the company’s release (including the S10’s) have the hole placed to the left or to the right side of the screen, Samsung goes for the most prominent position to place the hole on the Note10. This have its advantages and disadvantages ofcourse. For one thing, the placement will help users to keep the selfie camera in focus when taking group selfie more conveniently, but the placement may also cause distractions when operating the phone, especially when viewing media contents or playing games. It all boils down to the UI.

The new Galaxy Note10’s are slimmer and lighter when compared to Galaxy Note9. The Note10+, which is the larger of the two, is 7.9mm thick and weighs only 196 grams. In comparison, it is 0.9mm thinner and 5 grams lighter when compared to Note9. The improved S Pen, first introduced with the Galaxy Tab S6, now have accelerometer and gyroscope sensors baked in for added functionality such as “Air Actions” that let users control the phones using gesture at a distance (of up to 10 meters), thanks to Bluetooth Low Energy (BLE) embedded.

Moreover, the new stylus has a camera-control button to take a picture in one click and it can be wirelessly charged. According to Samsung, the S Pen Lithium-titanate inbuilt battery can deliver 10 hours of use in a single charge. Handwriting-to-text conversion and revamped screen memo are not left behind. The phones have ultrasonic in-display fingerprint sensors that can mapped thumbprints in 3D, a feature first introduced on the Galaxy S10’s. Iris scanner seen on the Note9 does not made it into any of the models.

While the Galaxy Note10 and Note10+ seem to be the same initially as they shared some similarities, there are few differences that segregate the device technically. The Note10+ has a larger crisper display (6.8-inch QHD+) and a bigger battery (4300mAh) compared to the Note10 6.3-inch Full HD+ display and smaller 3500mAh battery. Although they are both powered by the same chipsets and have the same front cameras, the rear cameras configuration of the device differs. 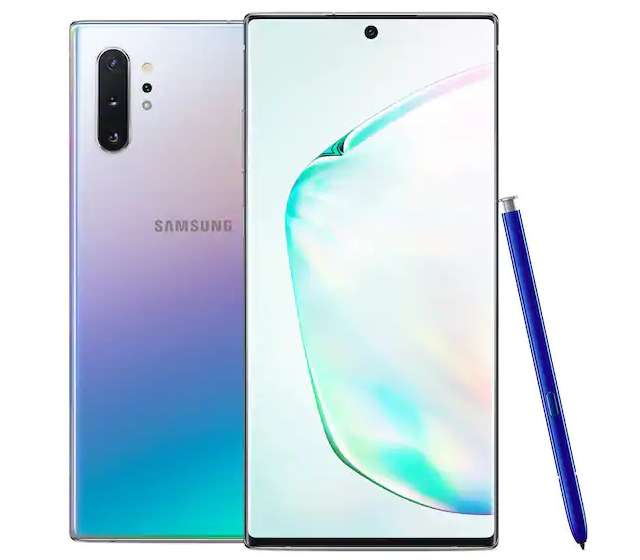 Triple 12MP+12MP+16MP cameras reside at the back of the phones, but the Note10+ throws a 3D ToF (Samsung called it DepthVision) to the mix. The “Plus” in the Note10+ is not only about the better display and larger battery, but also about the support of an external expandable storage that can accept up to 1TB MicroSD card via onboard hybrid dual SIM slot, which the Note10 lacked. Moreover, the plus model supports faster wired charging (45W), while the non-plus model is limited to 25W fast charging. Samsung is bundling 25W chargers in the box, so you will need to purchase a 45W charger separately if you are eyeing the Note10+.

The 3.5mm headphones jack does not made it into any of the models as wired audio is delivered through USB-C, but Samsung is including free USB-C headphones in the box. This year Galaxy Note also lacked heart rate sensors. The phones have stereo speakers tuned by AKG and Dolby Atmos, are water and dust resistant certified with IP68 ratings, and they can be used to wirelessly charge other portable gadgets via “PowerShare Wireless” fast reverse charging feature.

The usual Samsung pre-loaded stuffs i.e BixBy and DeX are available, but there are newcomers such as “PlayGalaxy Link” that will let you offline-stream your games to your PC and let you continue playing a game on your PC from where you stop on your mobile, and “Link to Windows” that let you sync your Note10 contacts, notifications, and messages to your Windows 10 PC.

For the Note10, the basic version comes with 8GB RAM paired with 256GB storage (UFS 3.0), while the 5G version (with Snapdragon X50 modem built-in) has a 12GB RAM. The Note10+ and Note10+ 5G have 12GB of RAM as default, paired with either 256GB or 512GB (UFS 3.0) storage. The phones will initially be available in three different colors, Aura Black, Aura White, and Aura Glow, and in exclusive Aura Blue and Aura Pink colors in some markets.

Pre-order for the phones begin on August 8th in select markets and sales on August 23rd, including in India and the U.S. The 5G versions will be available via carriers in the U.S (T-Mobile, Verizon, Sprint, and AT&T) at a later date.