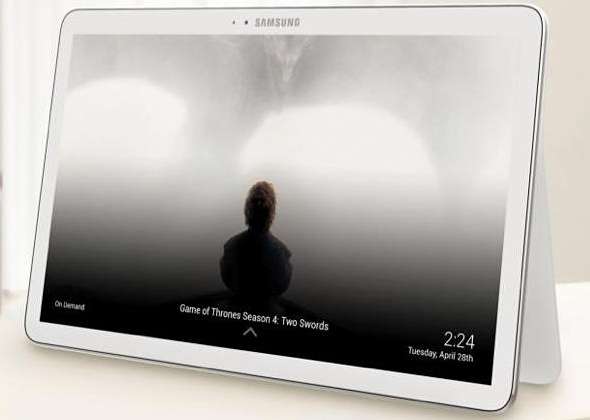 Samsung is readying a new tablet to launch later this month named Galaxy View, with a never-seen (excluding Alcatel OneTouch Xess) large 18.4-inch full-HD (1920 x 1080 pixels) display, something the firm has never made since its existence, and yes it is not a 2-in-1. The primary aim of this device is to offer the best when it comes to entertainment and gaming, and sure the display is enough to convince anyone that it is up to it.

The Galaxy View was first teased at IFA in early September and it is expected to debut this week or next week, though the exact date of its launching is unknown yet. According to various leaks which is yet to be confirmed by the company itself, the tablet will offer voice calling functionality with support of 4G LTE and 3G network, meaning, you can browse, text, chat and do what you normally do on your mobile phone. The presence of voice calling indicate it is likely to possess two or more microphones for better voice clarity due to its huge size.

The Galaxy View will be powered by an Exynos 7580 octa-core processor clocked at 1.6GHz, coupled with Mali-T720 GPU. A 2GB RAM is expected to be onboard and a 32GB storage. External storage support is likely.

In software aspect, Android 5.1.1 Lollipop is expected to govern the device on the inside, but we won’t be surprise if it is announce to run Android 6.0 Marshmallow. A 2.1-megapixel camera will be at the front above the display for video calling (or Selfie), and a 5700mAh battery at the back to turn it on. Other connectivity options to be included are Bluetooth 4.1, Wi-Fi 802.11ac, GPS, and GLONASS.

Sure, you will be the first to know when it goes official. Just stay connected.