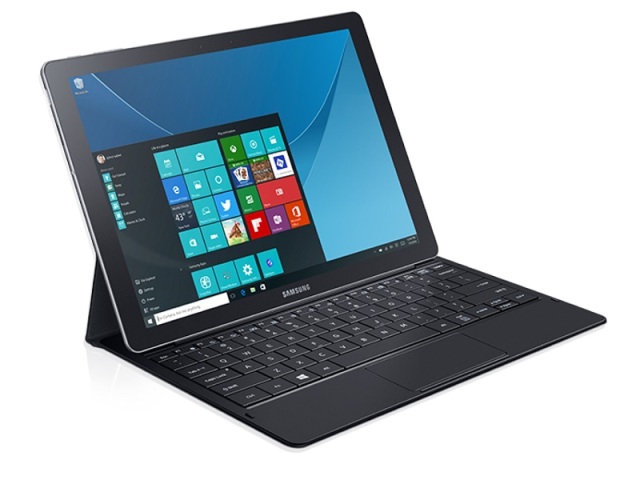 While the world are expecting Samsung to debut its much talk-about Galaxy S7 at CES this week, the company has once again take its chance to surprise the crowd by announcing a new 2-in-1 convertible tablet at the event today dubbed Galaxy TabPro S. Which is here to pursue and if possible overtake its primary rivals, the Surface Pro 4 and iPad Pro. As of now, Samsung is yet to reveal its pricing nor make mention of its availability.

The new Galaxy TabPro S comes in two variants, Wifi and LTE. The only difference between the two that will know at the moment (considering its specs we have at hand) is the first version supports only WiFi while the later offers 4G LTE (and possibly voice calling). Notably, the tablet runs Windows 10 out-of-the-box, making it the Samsung first Windows 10 powered tablet.

Portability and size seems to be the major competitive tag this year and Samsung seems well prepared enough. The tablet measure 6.3mm at its thinnest point which is quite fascinating, flaunting an overall weightness of 693 grams. In terms of specifications, the Galaxy TabPro S features a 12.0-inch AMOLED display with a resolution of 2160 x 1440 pixels. It is powered an Intel Core m3 processor, clubbed with 4GB of RAM. The tablet comes in two storage options, 128GB SSD and 256GB SSD.

Stylus, detachable keyboard and other accessories will be available separately when it go on sale.