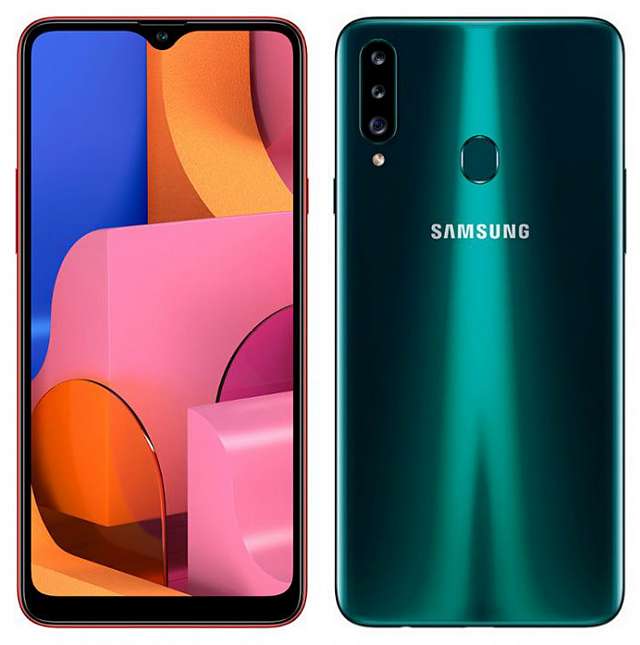 Samsung today announced the Galaxy A20s in Thailand. The phone features a 6.4-inch Infinity-V TFT display with HD+ (1560×720) resolution, while the “V” notch centered above the display accommodates an 8MP selfie camera with an f/2.0 aperture.

Moving on, the Galaxy A20s is powered by the old Qualcomm Snapdragon 450 octa-core chipset clocked at 1.8GHz, clubbed with Adreno 506 GPU, up to 4GB of RAM, and up to 64GB of storage. The storage can be expanded via MicroSD card up to 512GB. The phone sports triple camera behind – there is a 13MP main shooter with an f/1.8 aperture, a secondary 8MP ultra-wide angle camera (120°) with an f/2.2 aperture, and a 5MP depth camera.

The device runs Android 9.0 Pie with One UI on top. It has a dedicated dual SIM slot, while biometric security is provided by a rear-mounted fingerprint sensor. Connectivity presents are Bluetooth 4.2, WiFi, Dual 4G VoLTE, 3G, GPS, GLONASS, USB Type-C, 3.5mm headphones jack, and FM radio. The phone 163.3×77.5×8.0mm, weighs 183 grams, and is fuelled by a 4000mAh battery with 15W fast charging supports.

The Galaxy A20s has a reflective plastic back with gradient finish, themed in Red, Green, Black, and Blue colors. The 4GB RAM/64GB storage version is available in Thailand for TBH 6490 (US$212), while the 3GB RAM/32GB storage version will be sold at a later date.

Update: Launched in India (October 5, 2019)
The Galaxy A20s have reached India shore two weeks after it was declared official in Thailand. The 3GB/32GB version price in India is Rs 11,999 (US$168), while the 4GB/64GB version will be sold for Rs 13,999 (US$196). Sales will begin at Samsung online and offline stores and all leading retail outlets from October 5th.