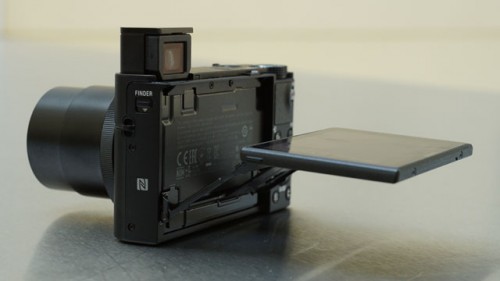 Sony has announced the next version of the popular compact range, the Sony RX100 III. This is an addition to the range of their previous series, RX100 and RX100 II, rather than a replacement.
One of the main differences between the RX100 III and its siblings is the inclusion of a built in, pop-up OLED electronic viewfinder. Aside from this the RX100 III will come with a fast 24-70mm wide zoom range with a F2.8 maximum aperture and a 20.1 megapixel resolution sensor.

Other improvements include a more screen with more tilt that can flip up to 180 degrees – for when camera phone selfies just won’t do.
Crucially, despite the additions the RX100 III manages to stay compact. It’s just 2.7mm thicker than the Mark II and just 9 grams heavier; all other dimensions remain the same.
The RX100 III will come with Sony’s BIONZ X image processing engine which is the processor found on the impressive Sony a7R. Sony claims this is three times faster than the BIONZ processor on the RX100 II and allows for faster continuous shooting.

Sony has also upgraded the video taking capability of the RX100 III, users will be able to use both the AVCHD and XAVC S format, and it is able to capture video with full pixel readout and 50Mbps bit rate. High 120p frame-rate shooting is also included.
Being able to easily connect your camera with your phone and tablet wirelessly has become a feature that consumers request more and more according to Sony. To accommodate this Wi-Fi and NFC have been added to the RX100 III that will work with a suite of PlayMemories phone apps. Sony has not provide a release date and price for the RX100 III.