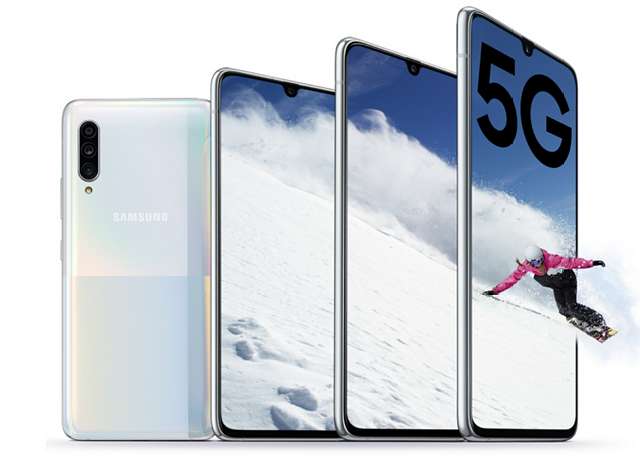 The 2019 Galaxy “A” series just gets more interesting with the addition of the newly-announced Galaxy A90 5G. Samsung made the announcement earlier today, highlighting the key features that made the device stands out from the rest of its family. While the Galaxy A80 its predecessor earned the title of the company’s first phone to had a pop up rotating triple camera, the Galaxy A90 5G is touts as the first in the “A” line-up to supports Samsung DeX, a feature once reserve only for the company’s Galaxy “S” and “Note” premium line-ups.

With Samsung DeX, users will be able to enjoy a PC-like experience when they connect their smartphones to external display. The phone also boasts of some high-end specifications that are mostly familiar, these include 5G supports, ushered in by the Snapdragon 855 chipset that is accompanied by a Snapdragon X50 5G modem; triple rear-facing camera with a 48MP sensor taking the lead, and a 32MP front camera. The secondary and tertiary rear cameras are ultra-wide and depth sensor, respectively, vertically-aligned at the top-left on the back.

AI enhancements are put in place to optimize photography, among the special features offered by the cameras are “Scene Optimizer”, “Super Steady”, and “Flaw Detector”. The selfie camera also brings “Live Focus” mode. Moving on, the Galaxy A90 5G has a 6.7-inch Infinity-U Super AMOLED display with Full HD+ resolution and 20:9 aspect ratio, same as the Galaxy A70. The device is offered in 6GB RAM and 8GB RAM versions, both accompanied by 128GB storage. But only the 6GB RAM version storage is expandable via MicroSD card up to 512GB.

The phone runs Android 9.0 Pie with One UI on top, while security is provided by in-display fingerprint sensor and Samsung Knox. Moreover, Microsoft “Your Phone App” lets Galaxy A90 5G users mirror their screen contents, including notifications, messages, and photos to their Windows 10 PCs. It has a glass back with geometric patterns and is fuelled by a 4500mAh battery with supports for 25W Super fast charging.

Price starts at KRW 899,800 (US$741). Sales will begin on September 4th in Korea, and from there it will roll out to other select regions. Buyers will be able to grab the phone in either Black or White colors.