Richest Man In Africa 2021 —In Africa as elsewhere in the world, the wealthiest have come through the pandemic just fine. 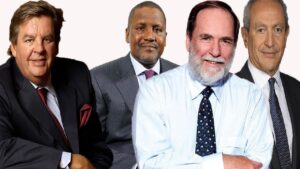 According to Forbes, The continent’s 18 billionaires are worth an average $4.1 billion, 12% more than a year ago, driven in part by Nigeria’s surging stock market.

Talking about Richest Man In Africa 2021, Aliko Dangote of Nigeria is the continent’s richest person, worth $12.6 billion, up by $2 billion from last year’s list thanks to a roughly 30% rise in the share price of Dangote Cement, by far his most valuable asset.

The second richest is Nassef Sawiris of Egypt, whose largest asset is a nearly 6% stake in sportswear maker Adidas.

At number three: Nicky Oppenheimer of South Africa, who inherited a stake in diamond firm DeBeers and ran the company until 2012, when he sold his family’s 40% stake in DeBeers to mining giant AngloAmerican for $5.1 billion.

The biggest gainer this year 2021 is another Nigerian cement tycoon, Abdulsamad Rabiu. Remarkably, shares of his BUA Cement PLC, which listed on the Nigeria Stock Exchange in January 2020, have doubled in value in the past year.

A spokesman for the Nigerian Stock Exchange said that BUA Cement meets the second requirement.

However, In this authentic top 10 richest man in Africa, Nigeria boasts the 1st, 5th and 6th places in the list.  Let’s explore how rich they are & what cars they drive!

Our authentic list of the top 10 richest man in Africa, their net worth and businesses was released by Forbes magazine in January 2021.

There was no significant difference in the positions but there was a magnificent drop in their net worth. Let’s explore how rich they are & what their net worth is, and business they do!

We know you would be interested in knowing the ranking of these big men. Here is a list of the top 10 richest man in Africa 2021 and their net worth and source of income. 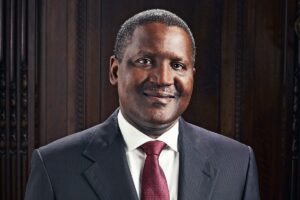 Aliko Dangote’s journey to fortune is not a rags-to-riches story. He came from a wealthy family that was able to provide financial assistance to start his business.

Over the years, Dangote has expanded into new business segments, including telecommunications, real estate, and steel manufacturing. Today his holding company, Dangote Group, is the largest conglomerate in West Africa. His title as “richest man in Africa” seems only to be one he’ll hold for years to come.

HOW DID ALIKO DANGOTE GET RICH?

Aliko Dangote made his fortune by importing and selling agricultural commodities, and later through oil and gas, consumer goods, and manufacturing.

The majority of Dangote’s fortune comes from Dangote Cement, which produces 45.6 million metric tons of cement every year and operates in 10 African countries.

WHAT DOES DANGOTE PRODUCE?

Dangote primarily produces cement, oil, and other commodities such as sugar.

WHO IS ALIKO DANGOTE’S WIFE?

Aliko Dangote is a bachelor and not currently married.

WHO IS THE RICHEST BLACK PERSON IN THE WORLD?

Aliko Dangote is the richest Black person in the world. 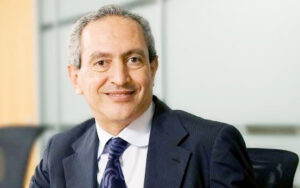 Nassef Sawiris is an investor and a scion of Egypt’s wealthiest family. His most valuable asset is a nearly 6% stake in sportswear maker Adidas.

In December 2020, he acquired a 5% stake in New York-listed firm Madison Square Garden Sports, owner of the NBA Knicks and the NHL Rangers teams.

He runs OCI, one of the world’s largest nitrogen fertilizer producers, with plants in Texas and Iowa; it trades on the Euronext Amsterdam exchange.

Orascom Construction, an engineering and building firm, trades on the Cairo exchange and Nasdaq Dubai.

His holdings include stakes in cement giant Lafarge Holcim and Adidas; he sits on the supervisory board of Adidas.

NASSEF SAWIRIS NET WORTH IS $8.3B

He is the executive Chairman of the Board of Directors and CEO of Orascom Development Holding AG. As of 2021 his net worth was estimated at $8.3 billion, making him the second  richest person in the Africa. 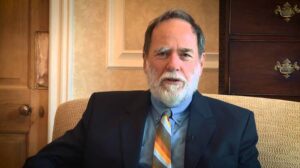 Oppenheimer, heir to his family’s fortune, sold his 40% stake in diamond firm DeBeers to mining group Anglo American for $5.1 billion in cash in 2012.

He was the third generation of his family to run DeBeers, and took the company private in 2001.

For 85 years until 2012, the Oppenheimer family occupied a controlling spot in the world’s diamond trade.

In 2014, Oppenheimer started Fireblade Aviation in Johannesburg, which operates chartered flights with its fleet of 3 planes and 2 helicopters.

He owns at least 720 square miles of conservation land across South Africa, Botswana and Zimbabwe.

NICKY OPPENHEIMER NET WORTH $7.9B

Nicky Oppenheimer net worth  is $7.79 billion as at 2021 which makes him  the richest person in Africa. Born in South Africa. 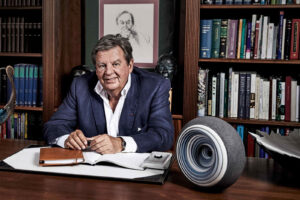 The company is best known for the brands Cartier and Montblanc.

It was formed in 1998 through a spinoff of assets owned by Rembrandt Group Limited (now Remgro Limited), which his father Anton formed in the 1940s.

He owns a 7% stake in diversified investment firm Remgro, which he chairs, as well as 25% of Reinet, an investment holding co. based in Luxembourg.

In recent years, Rupert has been a vocal opponent of plans to allow fracking in the Karoo, a region of South Africa where he owns land.

Together with his family, he was estimated to be worth $7.2 billion as of 2021, and was ranked as the fourth richest in Africa and second wealthiest person in South Africa on the Forbes list of The World’s Billionaires, with his fortune reported as having up to US$7.3 billion. 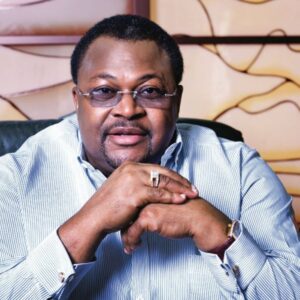 His mobile phone network, Globacom, is the third largest operator in Nigeria, with 55 million subscribers.

Adenuga got an MBA at Pace University in New York, supporting himself as a student by working as a taxi driver.

He made his first million at age 26 selling lace and distributing soft drinks.

Adenuga  is the #5 Africa’s Billionaires richest man for 2021.

Mike Adenuga’s real time net worth as at 2021 $6.3billion according to Forbes

Mike Adenuga has a leading Oil and Gas Company running with the vision of dominating the indigenous upstream petroleum companies in Africa.

Also has one of the largest telecommunication company in Africa. Globacom has different products including Glo Gateway, Glo Broad Access, Glo mobile and Glo-1 coverage. 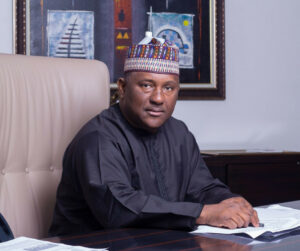 Abdulsamad Rabiu is the founder of BUA Group, a Nigerian conglomerate active in cement production, sugar refining and real estate.

Rabiu, the son of a businessman, inherited land from his father.

He set up his own business in 1988 importing iron, steel and chemicals.

ABDULSAMAD RABIU NET WORTH IS $5.4B

Abdulsamad Rabi is a Nigerian businessman who is the sixth richest man in Africa.

He is the founder of BUA Group, a Nigerian conglomerate with interests in sugar refining, cement production, real estate, steel, port concessions, manufacturing, oil and gas, and shipping. 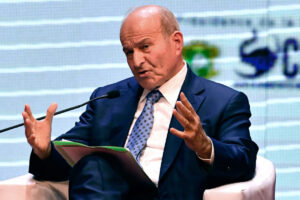 Issad Rebrab is the founder and CEO of Cevital, Algeria’s biggest privately-held company.

Cevital owns one of the largest sugar refineries in the world, with the capacity to produce 2 million tons a year.

After serving 8 months in jail on charges of corruption, Rebrab was released on January 1, 2020. He denies any wrongdoing.

ISSAD REBRAB NET WORTH IS $4.8B

Issad Rebrab is an Algerian businessman who has a net worth of $4.8 billion in this 2021. Mr. Rebrab rose to billionaires’ top 10 ranks Africa,  thanks to his impressive $4.8 billion (sales) food business, Cevital. 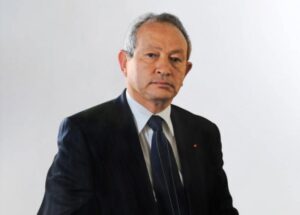 Naguib Sawiris is a scion of Egypt’s wealthiest family. His brother Nassef is also a billionaire.

He built a fortune in telecom, selling Orascom Telecom in 2011 to Russian telecom firm VimpelCom (now Veon) in a multibillion-dollar transaction.

He’s chairman of Orascom TMT Investments, which has stakes in an asset manager in Egypt and Italian internet company Italiaonline, among others.

He also developed a luxury resort called Silversands on the Caribbean island of Grenada.

NAGUIB SAWIRIS NET WORTH IS $3.2B

Naguib Sawiris is the neight richest man in Africa  with a net worth of $3.2 billion as this year 2021. 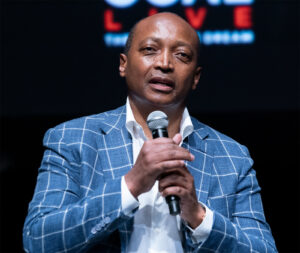 Patrice Motsepe, the founder and chairman of African Rainbow Minerals, became a billionaire in 2008 – the first black African on the Forbes list.

In 2016, he launched a new private equity firm, African Rainbow Capital, focused on investing in Africa.

Motsepe also has a stake in Sanlam, a listed financial services firm, and is the president and owner of the Mamelodi Sundowns Football Club.

In 1994, he became the first black partner at law firm Bowman Gilfillan in Johannesburg, and then started a mining services contracting business.

In 1997, he bought low-producing gold mine shafts and later turned them profitable.

PATRICE MOTSEPE NET WORTH IS $3 B

Patrice Motsepe Net worth is $3 billion.

Motsepe became the first Black African to appear on Forbes’ billionaire ist after reachint that status in 2008. 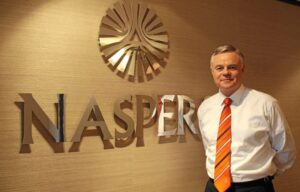 He led Naspers to invest in Chinese Internet and media firm Tencent in 2001 — by far the most profitable of the bets he made on companies elsewhere.

In 2019, Naspers put some assets into two publicly-traded companies, entertainment firm MultiChoice Group and Prosus, which contains the Tencent stake

It sold a 2% stake in Tencent in March 2018, its first time reducing its holding, but stated at the time it would not sell again for 3 years.

Bekker, who retired as the CEO of Naspers in March 2014, returned as chairman in April 2015.

KOOS BEKKER NET WORTH IS $2.9 BILLION

Source of wealth: Bekker is the chairman of Naspers, a media group that operates in over 100 countries. Naspers is one of the world’s largest technology investors, as reported by Forbes. The company also holds an investment in Tencent, a Chinese internet and media company.

The National Drugs Law Enforcement Agency (NDLEA) has paraded a suspected drug baron with cocaine worth ₦1 billion, as the suspect was arrested at...

”You are the husband every woman wants” – Pastor Folu Adeboye celebrates her husband,...

Clergyman and the general overseer of the Redeemed Christian Church of God RCCG, Pastor Enoch Adeboye, turns 79 today March 2. His wife of over...

9Mobile Recruitment 2020/2021 9Mobile  OR Etisalat Nigeria is a subsidiary of Etisalat, a giant outfit considered the biggest telecom operator in the Middle East. Notably,...

Developement Bank of Nigeria –Who can get a DBN loan?