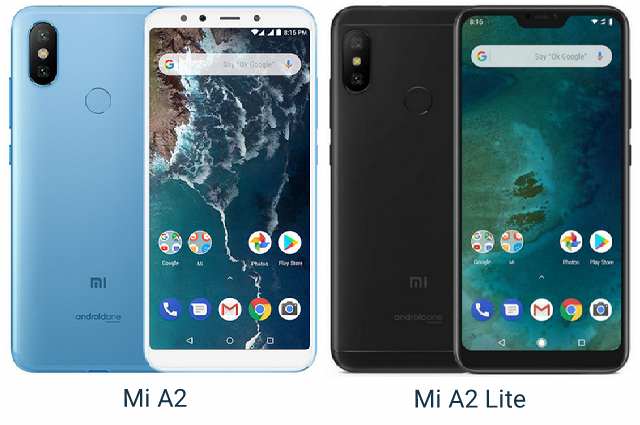 Xiaomi at its scheduled event in Spain earlier today announced two new smartphones, the Mi A2 and Mi A2 Lite, successors of the last year Mi A1 for the European market. The new Mi smartphones runs Google’s Android One software based on Android 8.1 Oreo, just like their predecessors, which guarantees them major updates (Android P and Q) for two consecutive years.

The Mi A2 and Mi A2 Lite differs in display, processor, camera, and battery capacity, but shared almost identical design. The former features a 5.99-inch Full HD+ 18:9 display and is driven by a Snapdragon 660 chipset, while the later comes with a slightly smaller 5.84-inch Full HD+ 19:9 display with a notch and is powered by the aged Snapdragon 625 processor. Moreover, the Mi A2 bears up to 6GB of RAM while the Mi A2 Lite is only limited to 4GB of RAM.

Although both phones sports dual rear-facing camera and a front camera, the Mi A2 cameras are much more better in specs than those of its accomplice. The cameras on the device includes various AI enhancements such as AI Portrait Shot, AI Beauty and AI Scene Detection.

Fingerprint sensors are embedded on the back plate of the phones—the Mi A2 packing a 3010mAh battery in addition, while the Mi A2 Lite draws its power from a 4000mAh battery.

The Mi A2 is the global variant of Mi 6X that was introduced in China in April. It lacked the 3.5mm audio jack.

The phones will be available from July 27 in France, from August 8 in Italy, and from August 10 in Spain, before they roll out to other select countries in the coming months.