The minister for health-designate, Kwaku Agyeman-Manu, led a government delegation to receive the consignment. COVAX is an international coalition set up to give equal access to the vaccine to all countries. Wealthier nations have, in the past, been accused of “hoarding” vaccines and leaving African countries behind in the race to inoculate their populations.

“Today marks the historic moment for which we have been planning and working so hard,” said UNICEF Executive Director Henrietta Fore. “With the first shipment of doses, we can make good on the promise of the COVAX facility to ensure people from less wealthy countries are not left behind in the race for life-saving vaccines.”

Africa is being left behind as cases surge. “We will not end the pandemic anywhere unless we end it everywhere,” said WHO Director-General Tedros Adhanom Ghebreyesus after Ghana received its vaccines.

“Today is a major first step towards realizing our shared vision of vaccine equity, but it’s just the beginning,” he added. Ghana’s information ministry says the vaccines will be first administered to health workers, people over 60, and those with underlying health conditions.

They also plan to secure additional vaccines through external agencies, a statement from the ministry said. 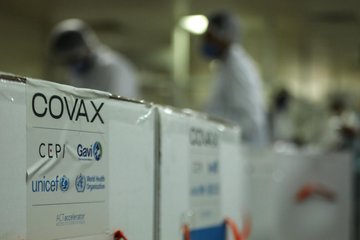