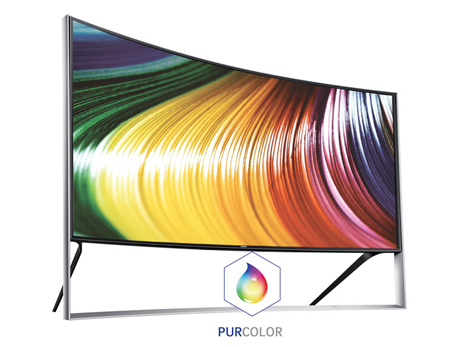 Samsung first unveiled its 105-inch TV at CES which took place earlier this year, finally, theTV is now available for pre-order at a staggering price of $120,000.

This is not just a TV, it is a Smart TV that is ready to blow your mind. Just grab your sit tight so won’t toppled over. The Samsung UN105S9 curve TV features a 105-inch 4K Ultra HD display, it boasts of an 11 million pixels, giving it a retina display of 5120×2160.

It uses an auto depth enhancing technology to adjust contrast for a greater sense of depth, and can scan footage and adjust brightness to deliver deeper darks and brighter whites. If the screen is too large for what you want to display, there is an option of breaking down the on-screen display into four seperate quadrants that can perform different tasks simultaneously.

The UN105S9 comes with wireless connectivity, 3D footage, and access to standard apps.

Titan is currently known to have produce the world largest TV, named the Zeus TV.

Samsung Goes From Modern To Classic With Serif TV