Nigerian Yahoo boys are touted as “big boys” in the light of their extravagant spending and ostentatious lifestyles as seen across social media. Meanwhile, it is important to note that we sometimes label these people “alleged Yahoo boys” simply because their sources of wealth are unknown and they live the exotic lifestyles characteristic of Yahoo boys in Nigeria.

This article is intended to familiarize readers with Nigeria’s 10 richest Yahoo boys. Notably, our list herein presents these “big boys” in no definite order as to how rich they are but HushPuppi is often considered the richest of them all. 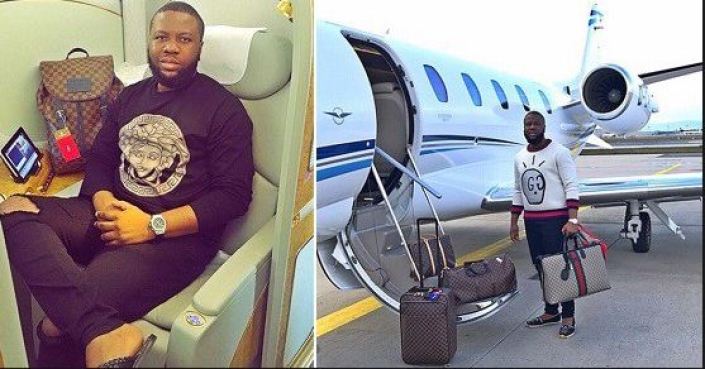 Ray HushPuppi is highly famous across social media platforms as one of Nigeria’s big boys. He has a record of controversies with Nigerian musical celebrities including Kcee, Ice Prince, Davido and Phyno. The self-acclaimed “GUCCI King in Nigeria”, HushPuppi is alleged to be Nigeria’s richest Yahoo boy. He is damn popular across social media platforms where he flaunts with expensive wear and accessories.

Going by the birth name Badmus Akeem, Baddy Oosha is a Malaysia-based Nigerian big boy who is popular with musicians and actors. Olamide, Lil Kesh and 9ice have reckoned with his name in their songs.

Mompha, on one hand, is known for living a luxurious lifestyle and on the other hand, he is regarded as a business person who enlightens his social media followers on how to become rich through working hard. On Mompha’s Instagram page, one can see pictures of the purported businessman with wads of hard currency. EFCC, in May 2020, arraigned Mompha and this could be a reason for the impression that he is one of Nigeria’s Yahoo boys.

Famously dubbed the Mayor of Cape Town, King Jide is an extravagant spender with no identified source of income –one convincing reason for people to see him as a Yahoo boy. A South Africa-based Nigerian, King Jide is said to have garnered huge social media following and expended as much as #5 million on 30 Ace of Spades and 1 Dom Perignon.

Aremo Gucci is touted as one of the well-to-do Yahoo boys in Nigeria and he is famous for flaunting with exotic wear and cars on Instagram. Currently, he has myriads of Instagram followers and he’s one of the alleged Yahoo boys who have been praised by Q-Dot, a popular Nigerian musician.

He’s one of the alleged Yahoo boys that have been praised by musicians. One of his selling points is obviously the claim that he is the only Gucci-recognized African man in Malaysia. Investor BJ is said to have engaged in a dispute with HushPuppi.

Just like several other Yahoo boys, flooding Instagram with pictures that portray a lavish lifestyle is one of the things Shy Boss is known for. A Nigerian big boy with a huge social media following (more than 180,000 IG followers), Shy Boss has eked out stardom for himself among alleged Yahoo boys.

Deskid Wayne is just one of the alleged Yahoo boys well known for flaunting with his luxurious lifestyle on Instagram. He rose to stardom after setting the highest dollar denomination ablaze. Meanwhile, he’s constantly seen on Instagram flaunting with pictures of himself and his girlfriend, The Queen.

Going by the birth name Adewale Adebayo, B Naira is a Geography graduate who portrays himself as a musician. Although he isn’t really popular as a musician, he has made wealth and he currently owns a music studio. His stardom as a musician is mostly credited to his song titled “Jasi”.

Going by the birth name Oluwasegun Akinola Opaogun, Opa6ix is one of the well-known alleged Yahoo boys who spend lavishly. Besides flaunting with expensive items on social media, he’s said to be popular with musicians. 9ice, Reminisce and Small Doctor have all praised him in their songs. Moreover, Opa6ix’s lifestyle gives many Nigerian youths the impression that Yahoo boys “do not have two heads”.

With this article, we’ve taken time to acquaint readers with the biggest (alleged) Yahoo boys in Nigeria but again, we’re not encouraging anyone to engage in Yahoo Yahoo because it is a flagrant crime punishable under the Nigerian law.