GoneMAD Software LLC has really put in great effort in creating this great Android music application, GoneMad was created, released and launched on Google play in 2011 and as since then been gaining popularity as fast as speed of light. It’s currently rated 4.5/5.0 and listed on Editor’s Choice. GoneMAD offers tons of tweaks and features you can rarely find on other music applications. One of the features we personally like is the customizable gestures system, in which you can assign thirty-two actions to seven different gestures, and it also offers lots of themes. This app has both trial and paid version, though the trial only last for 14 days after which you need to buy the unlocker before you can gain access again, you can get the full version for $3.99.

TTpod is one of the best streaming and music apps and they’ve been around quite for sometimes, they have success history that most other music apps don’t have. They are multi-platform based company and their music app is available for different Mobile Operating Systems including Java, Symbian and Windows Mobile, the good news is they’ve also bring this amazing app to android community. One of its best features is lyrics, which is fully editable and is automatically downloaded from their server and synchronize live on your android screen. You can view lyrics of the songs you are currently playing and even change the lyrics colour and background anywhere on your android screen. No other Android music apps has offer such feature. TTpod has over 100,000 different skins, you can download TTpod for free from the link below. 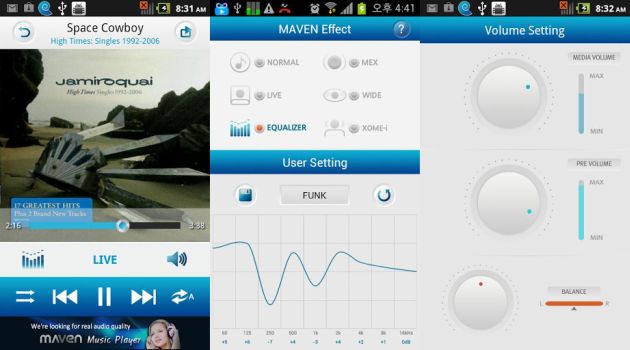 Maven is one of the Android music application that offers full 3D sound, a very sleak and clean interface, and five multiform audio virtualizers. The sound effects is great and fully customizable. It has five themes and is currently rated 4.4/5.0 on Google Play. This application is free to download.

How To Easily Transfer Files Between Android, iOS And Windows PC

5 Best Widgets Every Android Users Must Have On Their Homescreen