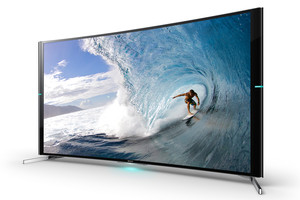 The Japanese tech giant, Sony, has unveiled its first curve 4K UHD TV, the Bravia S90. The TV comes in two screen sizes, 65-inch and 75-inch, both of which are capable of rendering four times of full-HD display. Sony also include its 4K Reality Pro technology which upscale and boost standard TV broadcast up to 1080p 4K display.

The Bravia S90 fully support 3D and comes with two pair of 3D glasses. Sony seems determined to usher its new curve TV with the best sound quality they can lay their hands on, onboard is a 4.2 channel multi angle speaker system for best sound output.

The TV also packed two low frequency woofers at its svelte screen for out-roaring pounding bass and there is an option to externally add subwoofers via wireless connection.

Other features include Sony’s X-tended Dynamic Range that boost contrasts for sparkling highlights and deep black.

The Bravia S90 is the first curve 4K TV to be produced by Sony. Pricing and availability details is not yet revealed by the company.