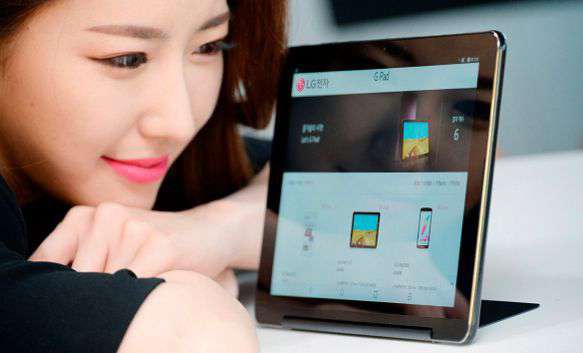 LG today introduced a new Android tablet in its home country called G Pad III 10.1, an upgraded version and the successor of G Pad II 10.1 that was released globally last year. The tablet comes with the same display, RAM capacity, and rear-mounted camera as its predecessor, but there have been some minor changes in the storage, processor,and battery capacity it packed behind. This also comes with an adjustable kick-stand that can be flip up to 70-degree, enabling users to use it in four different modes.

The G Pad III 10.1 runs Android 6.0 Marshmallow out-of-the-box with the company’s new “Time Square UX” on top. It also comes pre-installed with Microsoft Office apps such as Word, PowerPoint and Excel. In terms of specifications, the tablet features a 10.1-inch capacitive multi-touch display with a brilliant WUXGA (1920×1200 pixel) resolution and pixel density of 224ppi. It is powered by an unspecified octa-core processor clocked at 1.5GHz, slammed with 2GB of RAM. It includes a 32GB of built-in storage that is expandable up to 2TB via MicroSD card.

Sitting at the rear is a 5-megapixel autofocus camera without LED flash, while it harbors a 5-megapixel selfie camera at the front. Connectivity options included are 4G LTE (there is no mention of voice-calling support), Bluetooth 4.2 LE, WiFi 802.11ac, GPS/A-GPS, and USB Type-C. It is fuelled by a 6000mAh battery.