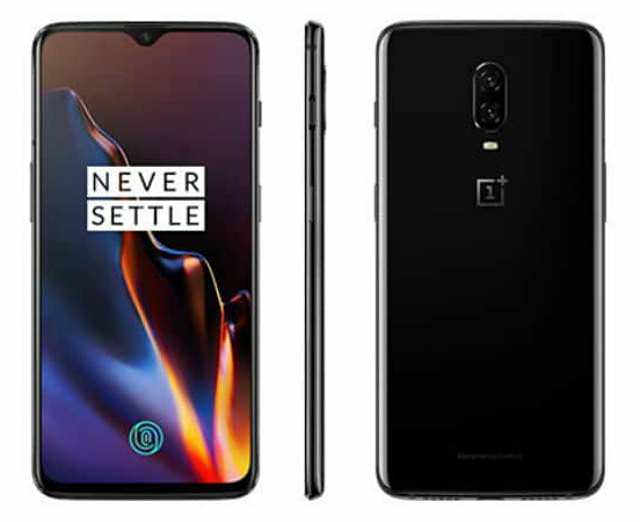 The OnePlus 6T has finally go official as expected. The Chinese company has pulled the wraps off at an event held in London to celebrate the launch, revealing the full specs sheet and pricing details for the US and the European markets.

The OnePlus 6T is an upgraded model and the successor of OnePlus 6, and in this regard the phone comes with new features (few nonetheless). Its front and back are now covered with Corning latest Gorilla Glass 6; but there are two models with different design language.

In terms of specifications, the phone features a larger 6.41-inch Optic AMOLED display compared to OnePlus 6 6.28-inch screen, is slightly taller at 19.5:9 aspect ratio, while the screen resolution remains Full HD+. The display has a waterdrop notch at the top that harbors the front camera and other array of sensors such as Ambient Light and Proximity sensors.

Powering the device is a Qualcomm Snapdragon 845 processor accompanied with up to 8GB of RAM and 256GB of inbuilt storage. At the rear is a vertically-aligned 16MP+20MP dual rear camera with Sony sensors, while it has a 16MP camera at the front, same as its predecessor.

The OnePlus 6T water-resistant body earns no ratings or certification, which is disappointing. Perhaps the most noticeable feature that the phone brings is the in-display fingerprint sensor. The firm claimed the new biometric security can unlock the phone within 0.34 seconds, this provides additional security with the face unlock security embedded in the front camera.

In software aspect, the phone runs Android 9.0 Pie buttered with Oxygen OS 9.0. The OnePlus 6T is powered by a bigger 3700mAh battery with Dash Charge fast charging. Most will not be pleased to know that OnePlus has get rid of the 3.5mm audio jack and instead opted in for the USB-C audio. A USB-C to 3.5mm adapter is included in the box though.

The phone will be available in the United States on T-Mobile from November 2nd, and in select European countries from November 6th. It will launch in India today so we should know the pricing for the region in few hours. This post will be updated to include the price info.

OnePlus has launched its new OnePlus 6T smartphone in India and revealed the pricing details for the said market, they are as follows:

It will be available online from November 2nd exclusively on Amazon.in and OnePlus eStore, and at select offline stores from November 3rd.

In overall, the OnePlus 6T offer a subtle upgrade when compared with OnePlus 6; the in-display fingerprint sensor and the larger battery are the most prominent. But OnePlus has followed HTC, Apple and other popular brand by removing the 3.5mm audio jack, which possibly hint that the OnePlus 7 may not have it either. Is OnePlus still the brand we knew three years ago?