The Galaxy Tab S6 is Samsung latest and one of the most intuitive tablet that will be arriving to select markets in late August, bringing with it enhanced S Pen, Book Cover Keyboard with function key and DeX key, optical in-display fingerprint sensor, and dual rear-facing camera—all of these packed in a slim 5.7mm metal body.

A lot have changed in the new 2019 Galaxy Tab S when compared with the 2018 Galaxy Tab S. While the 10.5-inch WQXGA (2560×1600) Super AMOLED display remain unchanged, and the screen aspect ratio is still 16:10, Samsung has make sure the device is as efficient and responsive as possible by opting for Qualcomm top-of-the-line Snapdragon 855 7nm octa-core chipset. Coupled with the SoC are up to 8GB of RAM and up to 256GB of storage. An additional 1TB of storage can be added via MicroSD card slot provided.

In 2018, Samsung introduced Iris scanner on the Galaxy Tab S4 and eliminate the traditional fingerprint sensor as a means of biometric security. It is the other way round on the Galaxy Tab S6; for reasons only known to the company, the iris scanner has been replaced with an optical in-display fingerprint sensor, this should be much faster and should take less time than the Iris scanner. 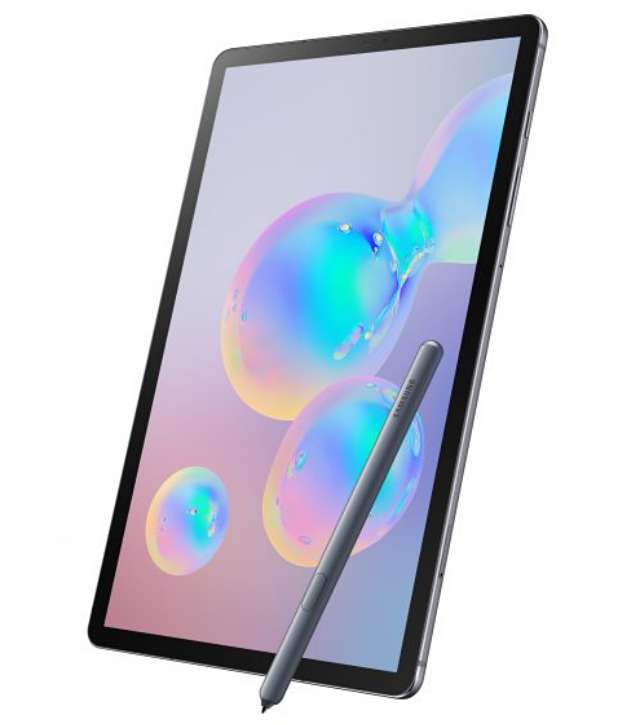 The S Pen has evolve greatly and every now and then Samsung add more features to make it smarter; this time the S Pen bundled with the Galaxy Tab S6 does not only serve as writing and drawing tools, but also as a wireless remote control. Thanks to its inbuilt Bluetooth Low Energy (BLE) feature, you can now use gesture to get things done faster, take selfies, or control the multimedia content displayed on the screen at a distance (up to 10 meters from the tablet) without contact.

The keyboard cover has a pen holder where the S Pen can be kept safe when not in use. Wireless charging feature makes sure the stylus can be charged anywhere anytime, and ten minutes of change can deliver 10 hours of standby time, according to the company. Samsung has also revamped the DeX baked into the Galaxy Tab S6 for PC-like experience when paired with an external display. A dedicated DeX function key has been added to the Book Cover Keyboard to easily launch or close DeX in a single tap.

Speaking of the Book Cover Keyboard, it have new function keys, a touch pad, and a free angle stand that let you sit the tablet at your preferred angle for comfortable viewing when watching movies at your leisure time. SmartThings integrated into Bixby lets you control smart appliances in the house via voice commands as well.

The tablet has dual camera pinned to the back—the main camera has a 13MP sensor, while the secondary is a 5MP ultra wide-angle lens (123°). At the front resides an 8MP camera for video calling and selfie. The rear cameras can record 4K video @30fps. The overall software system relied on Android 9.0 Pie enhanced with One UI 1.5. Other notable features of the Galaxy Tab S6 are quad speakers tuned by AKG and Dolby Atmos, and dual mic.

The Galaxy Tab S6 arrived today in India after more than eight weeks since its initial launch. Interested Indian buyers will be able to purchase the 6GB/128GB LTE version of the tablet from October 11th on Samsung eStore, Flipkart and Amazon India, at a price of Rs 59,900 (US$839). Optional Keyboard Cover will also be available on the same day for Rs 5,499 (US$77).